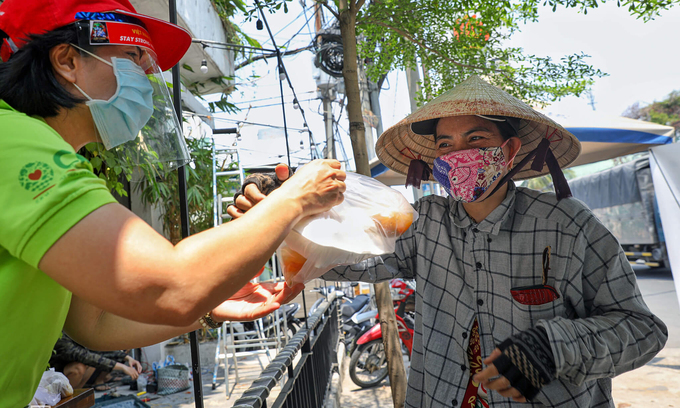 At many donation distribution sites in Vietnam, poor people crippled by Covid-19 are thankful and won’t take more than they need.

One of them took the donated food items and walked off immediately.

The other, a slim woman in her mid-thirties, hesitated after receiving her gift pack.

She stood silently for a while, an envelope in her hand. After she’d gathered enough courage, she walked towards Dao Tuan Hung, who was managing the booth. She pressed the envelope into his hand.

“I immediately told her it was a free present, but she said that it was not money. She left quickly after giving me the envelope,” Hung said.

Inside was a handwritten letter.

I have been an unemployed worker since the Covid-19 disease hit the country, the people and the government’s 16th decree (national social distancing campaign) to ensure the lives of people and the community. I sold things for a living but had to stop and paying rent has become difficult. I came across Lac Long Quan Street and found this place which distributes rice and noodles.

I was moved to tears to receive the gift wrapped by compassion which feeds me through the day, I hope the disease is going to be over soon so I could start working. Once again, I would like to thank you for spreading love and support during this difficult time. I wish you good health and fortune to save many people in these difficult times. I would like to sincerely thank you very much.

The letter was written in a clumsy manner with many grammatical mistakes, but its intent and purpose was clear.

Hung said that the letter “with so much affection” made him and his team feel that “we must continue to try not to let anyone down in our society.”

Hung is one of 20 members of a volunteer group who met virtually on social media and got together to help people in need during the Covid-19 crisis. Apart from the one Lac Long Quan Street, the group runs eight booths across the capital city.

Dang Nhu Quynh, 40, one of the group’s two co-founders, said the initiative has opened his eyes not only to the difficulties people face, but also their resilience and compassion even at such times.

Last Saturday, Quynh and his team members met a female scrap collector at their booth at 6 Phan Ke Binh Street in Hanoi. She did not want the gift pack, but wanted to buy the empty carton boxes piled on the sidewalk.

“She told me she hadn’t collect anything the whole morning because all the shops and restaurants were closed,” Quynh said.

The volunteers had an extra meal box that they’d bought for lunch that day, so they invited the woman to join them. After hesitating for a moment, she agreed.

After finishing the meal, the group agreed to give her the carton boxes she asked for and gave her a gift bag with rice and peanuts. The woman refused to accept it, saying it should be given to people worse off than her.

“If I can’t collect anything tomorrow, then I will stop by,” she said.

On Wednesday, Quynh met an old man in his 70s who asked for the gift bags for himself and two beggars on the street not so far from their booth at 54 Le Van Luong Street. One of the beggars had left, so the senior citizen walked back to the booth and returned one bag instead of keeping it for himself.

The volunteers have not only been touched by the honesty and compassion of those receiving their charity, but also by anonymous givers. An unnamed stranger phoned one of them at 5 a.m. and offered to make them banh cuon (rice paper rolls) for breakfast.

One elderly man delivered free rice to the group in the rain and several policemen pitched in, saying: “If everyone donates a little bit, people will benefit.”

“We can eat vegetables and eggs this week, so we still have money left to support poor families,” she said. She even promised to come back to donate more when she received her pension, Quynh said.

The ‘poor’ are generous

Nguyen Bao Chau, a Vietnamese organizer of a volunteer group in Melbourne, Australia, said many poor people have undeniable dignity, self-respect and generosity of spirit.

She said a single woman, one of the first to come to her group for help, got just five kg of rice and a few other items, because the group had received very little money from sponsors at that time.

When they managed to buy more rice later, she texted the single mother to come and collect more, but the latter declined, saying “when I run out I will ask, so other mothers can have the rice too.”

Chau said many donors to her group are unemployed women, mothers with scarce resources, but they still support the cause.

“A woman who recently lost her job because of Covid-19 does not have a personal vehicle, but she still walked to the store to buy cloth to make face masks for giving them away.

“When she ran out of money, she told us to tell people that if needed, they can send the cloth to her and she will make the face masks for them,” Chau said.

Across Vietnam, many initiatives have been established to help those in poverty to survive the epidemic, including rice ATMs which dispense rice for free and a supermarket selling essential items with a zero price tag.