Elephant tusks are available in many places, from souvenir shops and jewelry shops to tourist sites. But the sales there are very small compared with transactions via online markets.

MT, at No 81-83 Nguyen Van Cu street, is a well known souvenir shop in Buon Ma Thuot City. There are many stalls inside, including a jewelry and souvenir stall which display products made of elephant tusks. 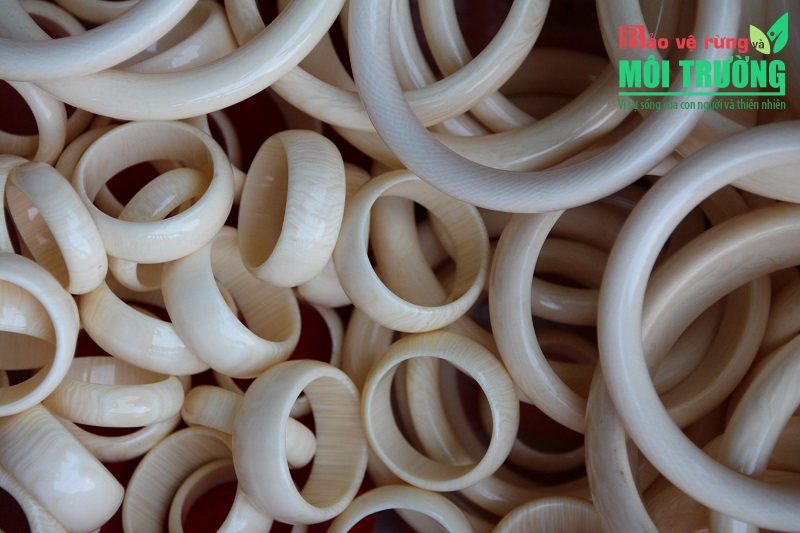 N, a salesman, showed many products, from bracelets, rings, pens, combs and a section of an elephant tail with black feathers. Each feather was priced at VND100,000.

Reporters acted as buyers seeking to buy a huge elephant tusk block to create a statue. The salesman brought a 2.2 kilogram tusk block, as big as an adult thigh, 10 centimeters long. N said this was an African elephant tusk and affirmed that the food for elephants in Africa was very good, and the quality of African tusks was better than Asian tusks.

“African tusks are most suitable for statues. The Asian tuft is soft, difficult to sculpt,” he explained, adding that he would sell the block at no less than VND70 million per kilogram. When reporters complained that the diameter of the tusk was too big to sculpt, N told reporters to come back days later to see new arrivals.

As promised, a few days later, N sent the image of an elephant tusk section via Zalo account. It was also an African tusk, but it had the diameter of 11 centimeters, length of 23 centimeters and weight of 4.918 kilograms. As the tusk block was smaller, the price was lower, at VND45 million per kilogram.

At another souvenir shop, reporters met G, a Lao woman, who settled down there after marrying a man in the locality. Ivory bracelets, rings and jewelries were in plastic baskets. There were also numerous tusks, small and big, and pieces of tusks.

G, N and other ivory traders in Buon Ma Thuot are all running big shops in the city. But they tend to encourage buyers to make transactions online. Their shops serve as ‘showrooms’ where buyers can visit and see products.

“After you transfer money into my account, I will send goods as soon as possible. And you can update my new arrivals on Facebook,” G said.

Buyers now do not have to come to Dak Lak, the ‘elephant metropolis’, to buy ivory products, but can do this in HCMC or order at home. The images of products will be sent to customers via Facebook and Zalo, and products will be delivered to their door.