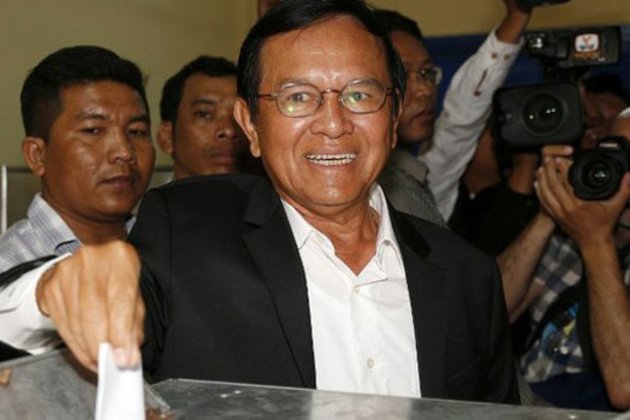 The unsigned Feb. 15 posting called former Cambodia National Rescue Party leader Kem Sokha an innocent man, detained on unjust charges, and noted he has now been held either in jail or under house arrest for nearly 18 months.

There is no evidence against him, and no trial date has been set. No evidence. No trial. No justice, the posting read.

Responding on Feb. 18, Cambodias Ministry of Justice said it had been taken by surprise by the U.S. embassy statement, which shows [the embassy] doesnt respect Cambodias sovereignty as an independent country.

The U.S. embassy in Phnom Penh has wrongly interpreted the facts of Kem Sokhas case and has maligned Cambodian authorities by accusing them of holding the detained opposition leader unfairly, the justice ministry said, adding, Let the court do its job.

Meanwhile, in a Feb. 16 statement, Cambodias foreign ministry slammed the embassys posting, urging it to immediately discontinue this politically motivated and undiplomatic conduct.

The Ministry of Foreign Affairs and International Cooperation wishes to reaffirm Cambodias commitment to the rule of law and the maintenance of peace, stability, and public order, which the Cambodian people are currently enjoying, the ministry wrote.

Cambodia National Rescue Party president Kem Sokha was arrested in September 2017 on treason charges widely seen as politically motivated, and the Supreme Court dissolved the CNRP two months later for its part in an alleged plot to topple the government.

The move banned the opposition partys candidates from taking part in a July 29, 2018 general election, which Hun Sens ruling Cambodian Peoples Party (CPP) then steamrolled without any viable opponent.

Denied bail six times, Kem Sokha was finally released from pre-trial detention on Sept. 10, 2018 but must now stay within a block radius of his home, cannot meet with CNRP officials or foreigners, and cannot take part in or host any rallies or political activities.

He still faces up to 30 years if convicted of treason.

In a Feb. 16 email to RFAs Khmer Service, U.S. embassy spokesperson Arend Zwartjes said the United States, as a signatory to the 1991 Paris Peace Accords that ended a Cambodian war with Vietnam, has a responsibility to see that democracy and human rights are respected in Cambodia.

Second, Kem Sokha has been accused of conspiring with the United States to overthrow the government, which is absurd and false. So the Cambodian government has involved us directly in this, Zwartjes wrote.

Cambodia cannot have a productive relationship with the United States until this is resolved properly and respectfully, Zwartjes wrote.

As a signatory to the Paris Accords, the U.S. is committed to helping Cambodia get back on the track to a functioning democracy, and therefore hasnt interfered in the countrys sovereignty, he said.