Roe v. Wade, the historic 1973 Supreme Court decision that made abortion legal in the first trimester of a woman’s pregnancy, is in danger of being struck down by the conservative majority, according to news reports published Monday night.

According to this Washington Post article, a draft opinion published by Politico said that a majority of justices are ready to reverse the ruling — though until a decision has been formally announced, any vote that has been taken can be reconsidered. In any case, the leak itself was big news — an unprecedented breach of court protocol in modern times.

The following background on the case comes from the National Constitution Center, a nonprofit organization in Philadelphia with a congressional charter to disseminate information about the U.S. Constitution on a nonpartisan basis:

END_OF_DOCUMENT_TOKEN_TO_BE_REPLACED

Political shifts, the impact of the COVID-19 pandemic, and the struggle for a shared vision of how to ‘build back better’, have reignited the debate about trade and human rights.

Although many trade agreements take human rights impacts into consideration, the monitoring systems that have emerged so far are not comprehensive. Without robust human rights monitoring, trading partners have little chance of ensuring that their counterparts are meeting their commitments.

While there are considerable structural, political and resource-related challenges to conducting more systematic and effective human rights monitoring, recent experiences in this field can help policymakers design more effective monitoring mechanisms for the future.

END_OF_DOCUMENT_TOKEN_TO_BE_REPLACED The European Parliament is set to approve on Wednesday (12 February) a trade agreement with Vietnam, despite some MEPs and NGOs seeking to postpone their consent until the human rights situation improves in the country.

The agreement, concluded after six years of negotiations, would be the most ambitious deal signed with a developing nation.

It will eliminate 99% of the tariffs over a seven-year period and will reduce other non-tariff barriers for cars wines and spirits. It will also protect Europe’s geographical indications  on products including Champagne, Rioja and Parmigiano.

“The deal will give a boost to the prosperity both of the EU and Vietnam, and represents a great opportunity for European exporters and investors”, said Parliament’s rapporteur, Belgian conservative Geert Bourgeois.

Vietnam is known for its textile and technology exports, especially smartphones. Samsung represents around 20% of the goods the country sends overseas. 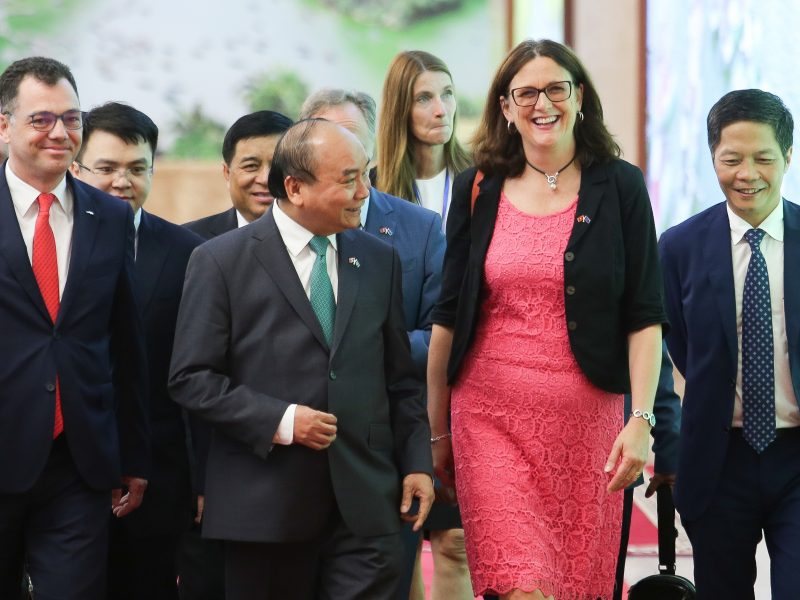 The European Union and Vietnam on Sunday (30 June) signed a long-awaited free trade deal that will slash duties on almost all goods, an agreement that pushes back against a rising tide of global protectionism and hailed as a “milestone” by Brussels.

But human rights organizations and some political groups were calling to postpone the approval until the country improves further its human rights and labour conditions.

During the debate held in the plenary of Tuesday, political groups including the EPP, Socialists, the liberal Renew Europe group and conservatives spoke in favour of giving their consent to their agreement, while the Identity and Democracy, the Greens and the Left-GUE were against.

Following the Parliament’s blessing, the agreement must be approved by the Council. The investment protection agreement must also be ratified by the 27 member states.
END_OF_DOCUMENT_TOKEN_TO_BE_REPLACED

At the onset of the Wuhan coronavirus outbreak, local doctor Li Wenliang <a END_OF_DOCUMENT_TOKEN_TO_BE_REPLACED

Myanmar has been ordered by the United Nations’ highest court to prevent genocidal violence against its Rohingya Muslim minority and preserve any evidence of past crimes.

In a momentous and unanimous decision, the international court of justice (ICJ) in The Hague imposed emergency “provisional measures” on the country – intervening in its domestic affairs by instructing the government of Aung San Suu Kyi to respect the requirements of the 1948 genocide convention.

Declaring that there was prima facie evidence of breaches of the convention, the court warned that the estimated 600,000 Rohingya remaining in Myanmar were “extremely vulnerable” to attacks by the military. END_OF_DOCUMENT_TOKEN_TO_BE_REPLACED

Background and state of play

The EU hopes that its free trade agreement (FTA) and investment protection agreement (IPA) with Vietnam will boost trade and investment; the agreements are also an important stepping stone to the EU’s longer-term goal of a region-to-region EU-Southeast Asia trade deal. Vietnam, a fast-growing and competitive economy whose bilateral trade with the EU has quintupled over the past ten years, is equally keen on the deal, which could potentially bring €15 billion a year of additional exports to the EU by 2035. END_OF_DOCUMENT_TOKEN_TO_BE_REPLACED

This was one of many attacks on land and environmental defenders in 2017 recorded by Global Witness, which defines such defenders as those who take peaceful action when land, forests, or rivers are encroached upon by industry, whether as members of the local community, or as activists, journalists, or lawyers. END_OF_DOCUMENT_TOKEN_TO_BE_REPLACED

END_OF_DOCUMENT_TOKEN_TO_BE_REPLACED

English: One Earth: Why the World Needs Indigenous Communities to Steward Their Lands

Vietnam has approved a project that aims to make human rights an integral subject in education nationwide by 2025.

Per the project, teaching human rights will be piloted at several kindergartens, schools, universities and vocational training centers in three cities and provinces in the north, south, and central regions.

By 2025, all educational establishments across Vietnam will have the subject in their curriculum. END_OF_DOCUMENT_TOKEN_TO_BE_REPLACED