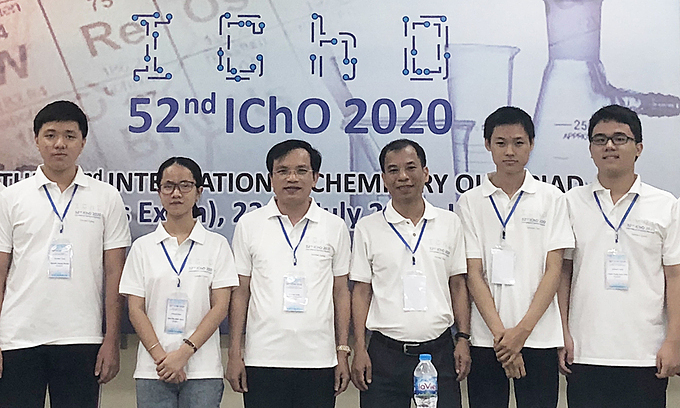 Four Vietnamese students at the 2020 International Chemistry Olympiad with two officials from the Ministry of Education and Training (C) at Hanoi National University of Education. Photo courtesy of the ministry.

All four Vietnamese contestants at the International Chemistry Olympiad 2020 won gold medals, making them the second highest-ranking team after the U.S.

This is Vietnam’s best ever International Chemistry Olympiad result so far.

Dang scored the highest among the four – 97/100 – to rank 5th out of 231 candidates, while Duong ranked 9th, Anh 15th and Trang 22nd. Their achievements allowed Vietnam to rank second out of 60 competing countries and territories.

The competition from July 6-25 was supposed to be held in Istanbul, but the pandemic prompted event organizers to host it online instead.

The Vietnamese students took the exam at Hanoi National University of Education where they were monitored via the organizers’ camera system in real-time.

This year’s competition saw 20 national teams less than the previous year due to Covid-19.