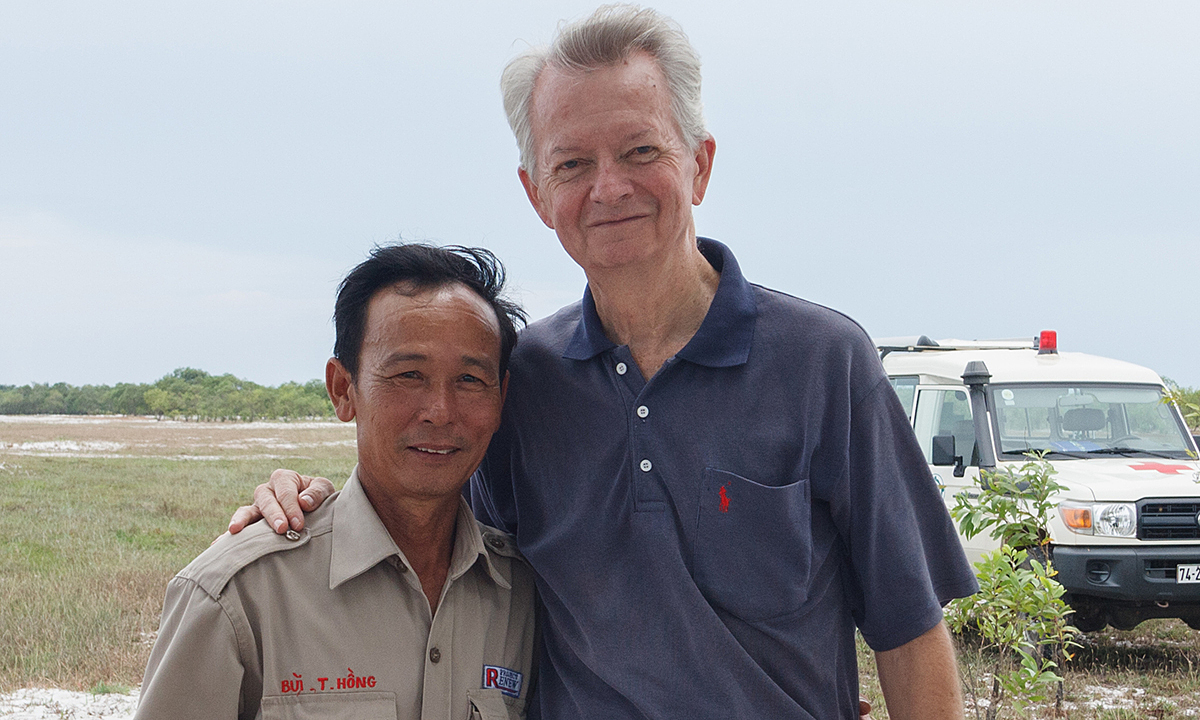 For the past 25 years, Chuck Searcy has cleaned up explosives and helped disabled children in Quang Tri Province, a prime Vietnam War battleground.

Chuck Searcy is no stranger to the employees of Project RENEW, a Vietnamese organization that deals with unexploded ordnance left from the Vietnam War. His thin stature and silver hair are a stark contrast to his gregarious, lively persona. Traveling back and forth between Hanoi and Quang Tri Province, a major former battlefield in central Vietnam, Searcy has done all in his capacity to mend wartime wounds.

After all, Searcy had helped launch Project RENEW in 2001, now serving as its international advisor. At 75, Searcy joked he’s actually 76 in Vietnamese perception and didn’t speak the language well since he was lazy and not too bright.

Yet for the last 25 years, Searcy, a Vietnam War veteran, has done all he could to heal what the war had destroyed, from disarming unexploded ordnance to helping disabled Vietnamese, one bomb, one child at a time.

Searcy first came to Vietnam in June 1967 as an officer for an intelligence unit in Saigon. For a year, he had collected all the information he could about the Vietnam War. Thanks to his job, which required him to deal with daily reports, Searcy had gained much insight into local politics, history, and culture.

He said Americans came to Vietnam to win the war. But they understood neither Vietnam nor the Vietnamese people.

He realized so many of them had come to Vietnam for nothing, that it was a bad decision none had wanted in the first place.

When he returned to the U.S., Searcy joined the Vietnam Veterans Against the War (VVAW), telling people of the horrible things he had seen and calling for the war to stop. He returned to Vietnam in 1992 with other veterans, this time as a tourist. For a month, he had visited several provinces in the Mekong Delta, then traveled to Hanoi and moved southward from there, just so he could experience the country in its entirety.

He saw Vietnam like he never did before. Talking with locals along his journey, Searcy experienced how Vietnamese were friendly, open and hospitable to him as a tourist. Unlike their much more hostile attitudes upon learning he had been a U.S. soldier who had fought in the war.

He also saw how poor Vietnam had been back then. There were no tourists, no hotels and no electricity. There were, however, bombs. A lot of bombs.

He saw many locals taking the bombs apart so they could salvage the explosives and metal. Searcy was aghast, shocked at how dangerous it was.

After his trip to Vietnam, he was a changed man. Thoughts about how he could help Vietnamese scarred by the war always occupied his mind. The next time he returned to the country was in 1993, and then in 1995 when Vietnam Veterans Memorial Fund (VVMF) organized its first activities in Hanoi to help rehabilitate and employ disabled children. Searcy came along as a representative for the fund.

Since then, he has never left.

In Vietnam, Searcy continued to help disabled children, while learning more about local life during the war. He started to realize that even after the war had ended, thousands of Vietnamese still lost their lives to its instruments, the numerous bombs and other unexploded ordnance left behind in battle.

So Searcy called on anyone he could find: U.S. government officials, military officers and fellow veterans, telling them they had to take responsibility for the explosives the U.S. left behind in Vietnam. At first however, it was difficult convincing them as both parties still lacked much-needed trust.

But his efforts paid off in 1996, when the U.S. government sponsored Vietnam a $3 million bomb disposal device. Then in 2001, Searcy helped found Project RENEW with Norwegian People’s Aid (NPA) as a primary partner in Quang Tri. The project aims to cleaning up unexploded ordnance as well as provide medical assistance, rehabilitation and income for bomb and mine victims.

Over two decades, RENEW and other NGO projects have helped remove dozens of tons of explosives to keep Quang Tri locals safe. Since 2018, the province has recorded no casualty due to unexploded ordnance.

Besides providing assistance to NGO projects, Searcy also brought U.S. veterans and students to Vietnam so they could learn about life here after the war.

Nguyen Hieu Trung, coordination manager of RENEW, said Searcy has been a long-time friend of Quang Tri. He was the one who had helped expand RENEW’s staff from four in the organization’s earliest days to around the current 250, and extend the organization’s reach to other localities like Quang Binh and Quang Ngai provinces, said Trung.

“With numerous connections in the U.S. Congress and government, Chuck’s voice has helped build a bridge between the U.S. and Vietnam,” Trung said.

Drew Bazil, from the U.S. Embassy in Hanoi, said Searcy represented the best of America.

Searcy came to Vietnam as an ambassador to heal the wounds of war, not as a soldier, he said at a Wednesday meeting in Quang Tri to commemorate the 25th anniversary of the U.S. and Vietnam normalizing relations.

Today, Searcy, the chairman of the Vietnamese branch of Veterans for Peace (VFP), lives in Hanoi and often drinks coffee with his friends. He also goes to the cinema to watch classic Vietnamese films.

He said many have tried to introduce him to a women out of worry he lives alone. But he’s old now, and has already been married twice before coming to Vietnam. He has had enough, he joked.

But one thing is for sure, Chuck Searcy is here to stay, he pledged. He would continue to help both the people of Vietnam and the U.S. to relieve post-war pain, and to bridge the gaps between the two countries as he always does.