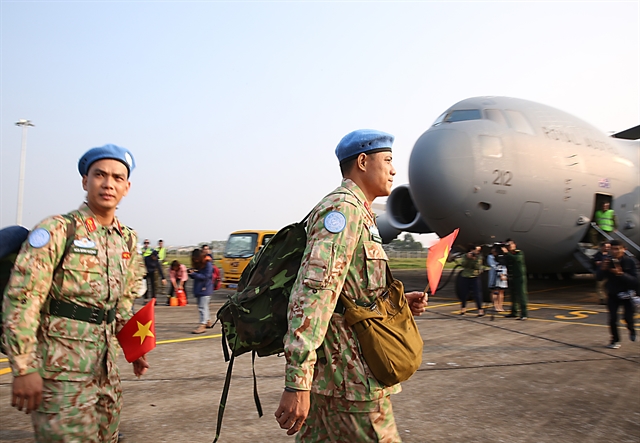 The video conference was held on peace operations and human rights under the chair of Annegret Kramp-Karrenbauer, German Federal Minister of Defence.

Briefers included High Commissioner for Human Rights Michelle Bachelet, Special Representative for South Sudan and head of the UN Mission in South Sudan (UNMISS) David Shearer and Senga Dismas Kitenge of Groupe Lotus, a human rights non-governmental organisation based in the Democratic Republic of the Congo.

Speaking at the debate, Quý said UN peacekeeping missions must ensure the accuracy and neutrality of information gathered during the supervision, reporting and analysis of the host countries’ enforcement of human rights.

All peacekeeping operations must adhere to such basic principles, take into account local economic, social and cultural features, and pay attention to protecting vulnerable groups in conflicts, he noted.

Peacekeepers should function as role models in complying with UN principles and disciplines on human rights, and be provided with knowledge and skills regarding this matter both before and during operations, the diplomat added.

Previously at a dialogue with Virginia Gamba, Special Representative of the UN Secretary-General for Children and Armed Conflict, within the 44th session of the UN Human Rights Council, Ambassador Lê Thị Tuyết Mai, head of the Vietnamese delegation in Geneva,
said Việt Nam always pays attention to protecting children’s rights in armed conflicts.

The ambassador condemned acts of violence and violations of children’s rights, saying Việt Nam is willing to share experience in this field.

She called on relevant sides to observe basic principles of international humanitarian law and the Convention on the Rights of the Child (CRC) to protect civilians, especially children in armed conflicts, take measures to minimise the adverse impact of armed conflicts on children, find basic solutions to deal with the root cause of conflicts, conduct national reconciliation and promote sustainable development while helping children who participated in armed conflicts reintegrate into the community. — VNS