Palestinians in Ramallah demonstrate against Israel’s plan to annex a third of the occupied West Bank and Jordan Valley.

Ramallah, occupied West Bank – Despite a delay in the long-anticipated declaration of an Israeli plan to annex one-third of the already illegally occupied West Bank, including parts of the strategic Jordan Valley, Palestinians decried the plan with some holding protests in Ramallah and Gaza City.

Israel’s Foreign Minister Gabi Ashkenazi said in a radio interview on Wednesday the announcement of the annexation plan was not imminent, despite the July 1 date set by the coalition government to start the fiercely opposed process. He instead told the interviewer to refer further questions about the matter to Prime Minister Benjamin Netanyahu.

Still, about 150 Palestinian demonstrators gathered on Wednesday evening in the centre of Ramallah, the seat of the Palestinian Authority, to denounce the plan. They said despite the postponed declaration, annexation was still on the table.

Carrying posters and waving Palestinian flags, the crowds chanted anti-occupation slogans such as “Down, down with the occupation”, and “We will resist until full liberation. We will not leave.”

Announced in January as US President Donald Trump’s “Middle East plan,” the proposal wants to establish a demilitarised Palestinian state on a patchwork of disjointed Palestinian territories.

This is history repeating itself. The annexation plan is another Nakba [catastrophe] and Naksa [day of setback].

While Israel’s alternate Prime Minister Benny Gantz said last week that annexation should wait until the coronavirus crisis is over, Netanyahu might still go ahead with it.

But Israeli military and intelligence officials have warned the move could cause an uprising in the West Bank, which would be a grave security risk for Israel.

Furthermore, the plan has been met with condemnation by the Palestinian public, their leaders and the global community alike.

“I’m angry because this is history repeating itself,” said Zeina Mustafa, a 20-year-old student from Ramallah.

“The annexation plan is another Nakba [catastrophe] and Naksa [day of setback],” she added, referring to the 1948 Palestinian exodus that saw more than 700,000 Palestinian Arabs expelled from their homes and an Israeli state declared, and the 1967 Six-Day War after that saw Israel take control of the West Bank from Jordan and the Gaza Strip from Egypt.

For Belal Gaith, a 40-year-old resident of Ramallah, the annexation plan would push Palestinians further under a state of occupation and military rule.

“As soon as the annexation plan is declared, it will be the end of the Oslo Accords,” he said, referring to the 1993 agreement which established the Palestinian Authority (PA) and gave it limited powers.

“We can potentially lose every single bit of our lands and live as prisoners under Israeli rule,” he added.

In the lead up to the anticipated declaration, the head of the PA and Palestinian President, Mahmoud Abbas, said the authority had terminated all of its agreements with Israel and the United States amid Israel’s push for annexation.

Palestinian Prime Minister Mohammad Shtayyeh warned if Israel goes ahead with the plan, Palestinians would unilaterally declare a state along the pre-1967 borders. 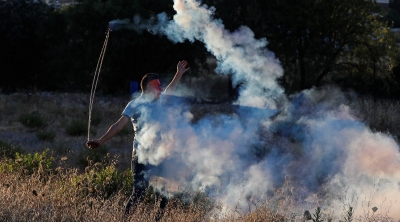 A Palestinian demonstrator returns a tear gas canister during a protest against Israel’s plan to annex parts of the Israeli-occupied West Bank, near the Jewish settlement of Beit El near Ramallah [Mohamad Torokman/Reuters]

A key criticism of the plan is it would prevent Palestinians from accessing their agricultural land and water resources in the fertile Jordan Valley – known as the “bread basket” for Palestinians. The plan could destroy farmers’ export businesses and deprive them of their source of income.

“Israel is creating an environment in which the Palestinians cannot grow in their lands and business,” said Walid Assaf, a Palestinian minister and chairman of the Commission Against the Wall and Settlements.

“The crux of this conflict has been the land and Israel’s helping Jewish settlers take over it and expel the Palestinians in the process.”

Over the past few years, Palestinian and Israeli NGOs have reported an increase in the construction of settlements in the occupied West Bank and Jewish settler-only roads that connect them with Israel.

The structures have further carved up Palestinian territories and added to the disjointed nature of cities, villages and towns.

According to Assaf, Israel has already taken practical steps to annex the areas included in the plan, with the Jewish state allegedly building three new settlements in recent months; two near Nablus and another near Hebron. 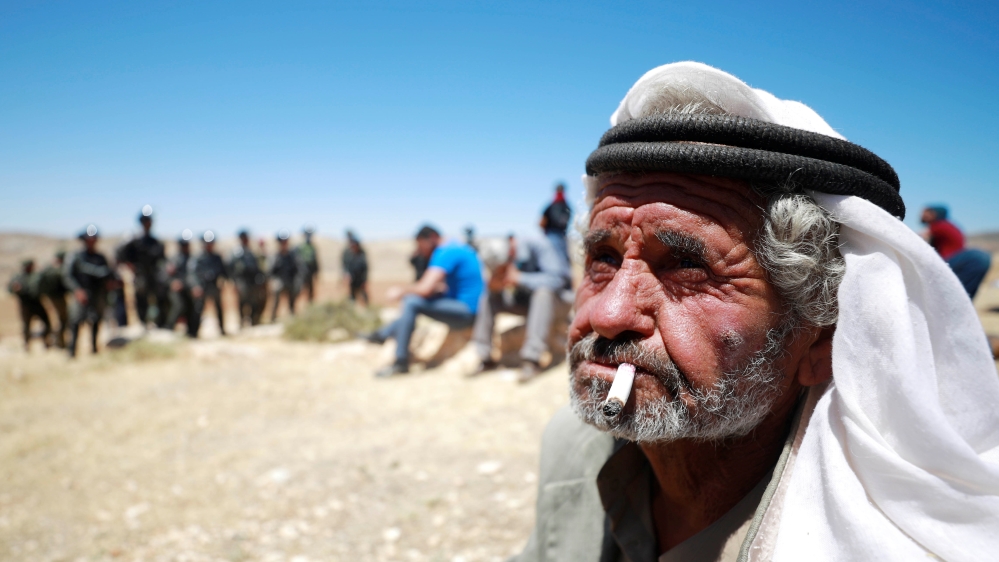 Still, many Palestinians believe the plan is only a formality and a de facto Israeli occupation of their land has been under way for many years.

“Israel’s annexation plan has been in process since 1967,” said Salah Khawaja, coordinator of an anti-occupation campaign called the Popular Committee to Resist the Wall and the Settlements.

“Israel has since built settlements and the wall. And so, annexation has been ongoing for a long time,” he added, as he stood among the crowd of demonstrators in Ramallah.

Although the plan does not aim to annex occupied East Jerusalem, which the Palestinian Authority sees as the capital of a future Palestinian state, the international community, including the United Nations and the European Union, have said it threatens to sabotage any peace agreement or two-state solution to the Arab-Israeli conflict.

“The plan will be the final nail in the coffin. It will end any chance for a future Palestinian state and our right to self-determination,” said Assaf.

“It will also restrict Palestinian lives in a way like never before. Making it impossible for us to build our lives or dream for the future.”