TĐH: These Muslim Chams in Cambodia are descendants of the Vietnamese Chams from the Champa Kingdom that VN annexed from the 14th century and completed the annexation in the 17th century. Should the Vietnamese government come to Cambodia and help them?

Phnom Penh, Cambodia – On a good day, fish vendor Sen Ror can make about $7.50 but that is on a good day.

Usually, she only makes about a third of that, taking home roughly $2.50, which is all she has to buy food for her four children and elderly father, for whom she is the sole support after divorcing her husband a few years ago because of his drug addiction.

Even this precarious existence is now threatened: Cambodia’s government has ordered Ror and hundreds of other Muslim Chams who make their homes along the riverbanks of the capital city to leave.

Thirty-year-old Ror grew up in a community of Cham on the Phnom Penh Peninsula where the Tonle Sap and Mekong rivers meet.

The Cham is an ethnic minority group living in parts of Cambodia and southern Vietnam. Its members are considered the descendants of the once-powerful Champa kingdom. The Cham people  who live in Cambodia are predominantly Muslim, while those living in Vietnam are mostly Hindu.

Today, many of the approximately 600,000 Cham people in Cambodia live along the country’s Mekong River, earning their living through fishing.

Late last month, district chief Klang Huot gave the Cham a one-week deadline to leave “to ensure security, safety, order, beauty and public order and in preparation for the Asia Europe Meeting (ASEM),” and to “lift up the reputation and beauty of Phnom Penh city.”

The ASEM summit is to take place next year at the Sokha Hotel, which was built on the peninsula in the centre of the capital in 2009 and opened in 2015. 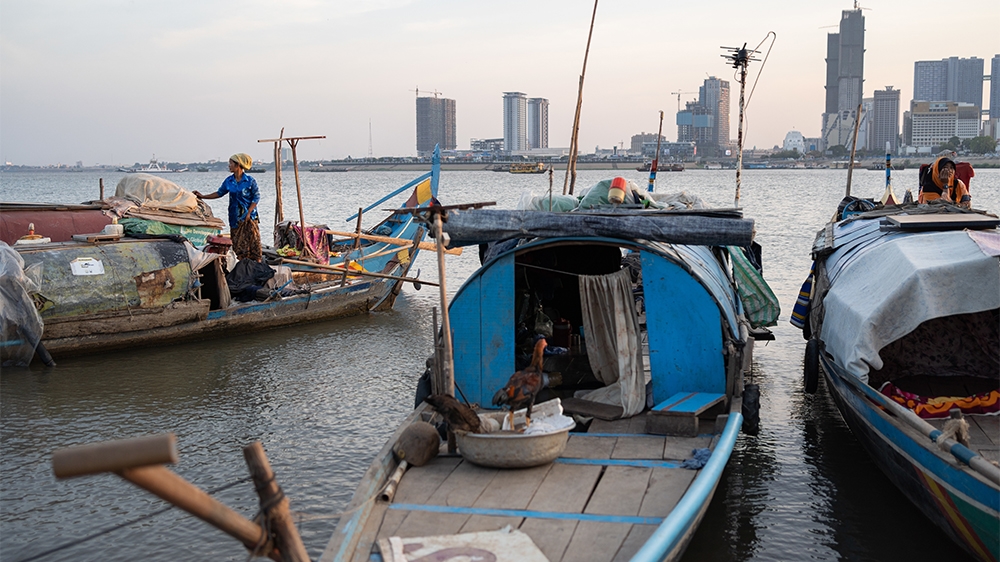 Many Cham people earn their living through fishing. Here, Cham fishing boats are seen anchored in Chroy Changvar, the peninsula that sits at the confluence of the Tonle Sap and Mekong River [Thomas Cristofoletti/ Ruom via Al Jazeera]

Like Ror, 77 other families have to relocate, according to community representative Y You. More than 100 additional families, he said, are nomadic fishermen who will not be able to return to Phnom Penh as they usually did each year.

The community requested an extension of the deadline to allow them to find a location to move to, but have not yet received an official response. They say they do not have sufficient funds to buy a new plot of land.

During the Khmer Rouge era, the Cham were persecuted, their Qurans burned, and members of the community forced to eat pork.

Under the current rule of Prime Minister Hun Sen, some senior Cham leaders have developed ties with the government. But, faced with a lack of education, many of them remain marginalised.

Following orders from authorities, Ror, the fish vendor, dismantled her home and built a smaller shed a few hundred metres down the riverbank.

“My biggest concern at the moment is for the authorities to come and tell me to leave this place,” she told Al Jazeera. “What if they chase us away, where would we go?” 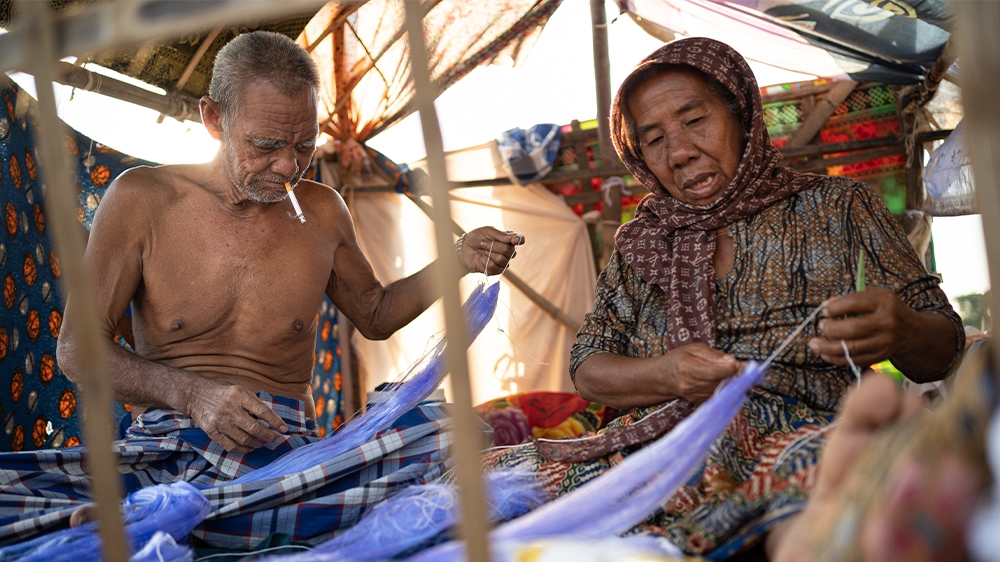 Ror is considering taking out a loan to buy a boat that would enable her to live on the riverbank and continue her job. A small boat, she said, costs between $400 and $600.

But community representative Y You said authorities had told him that boats are also banned.

Prospect of another eviction

Cambodian authorities in the past have rounded up homeless city dwellers and sex workers in the run-up to international meetings, justifying the acts as a way to “clean” the city.

Evictions often resulted in violence, with authorities forcefully dismantling the houses of villagers and arresting those who resisted relocation.

Before a visit by Chinese President Xi Jinping in 2016, for example, the government brought more than 50 people to the Prey Speu detention centre “to beautify our Phnom Penh”.

More than 800 people were arrested in 2012 before an ASEAN summit.

Mat Sales and his wife Sen Som are among those who will have to leave with their boats.

The couple, their six children and 11 grandchildren live on one large boat and two smaller ones. Sales sleeps in a small, makeshift wooden shack because there is not enough space for everyone. To comply with the order, he dismantled his previous shelter, which was sturdier and roomier. 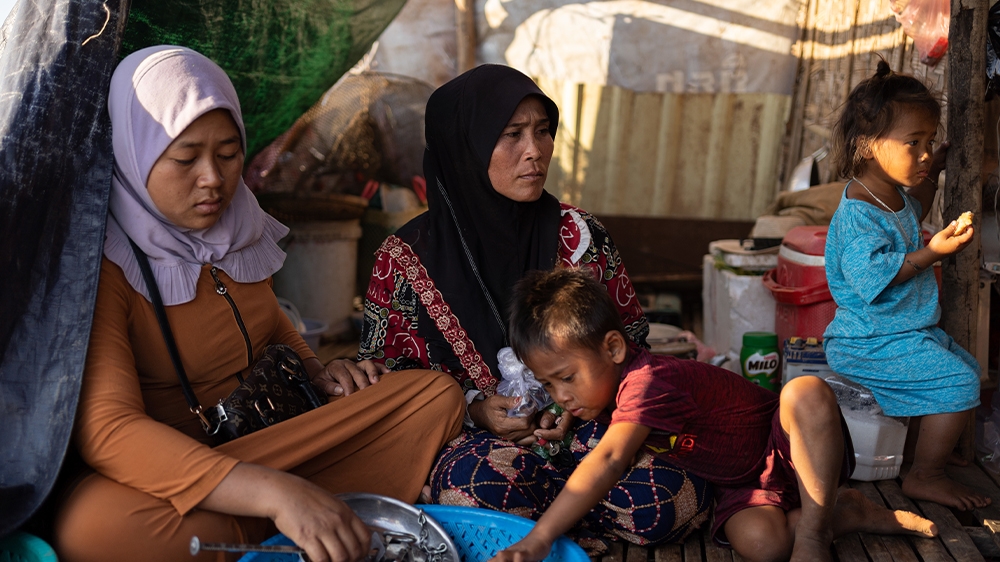 Community advocates say a sense of community is very important to many of the estimated 600,000 Cham people in Cambodia [Thomas Cristofoletti/Ruom via Al Jazeera]

“If they tell us to leave today,” the 72-year old grandfather said, “we would leave the boat and take it all, but we wouldn’t know where to go.”

Sitting on the wooden deck, the boat rocking in the wind, Sales talks about how he and his wife, too old to fish, make nets to supplement their children’s income.

But with each net taking between three and seven days to finish and a big family to feed, he said this was barely enough to buy rice.

Saving a sense of community

Before the Khmer Rouge period, Sales said they would come to Phnom Penh seasonally but, when the regime collapsed, they decided to settle permanently.

They watched the landscape change, from a green riverbank to a desolate space overlooked by the 16-storey Sokha hotel, standing in stark contrast to the Cham community’s abodes.

A single night’s stay at the hotel costs a minimum of $105 – more than a community member earns in a month. 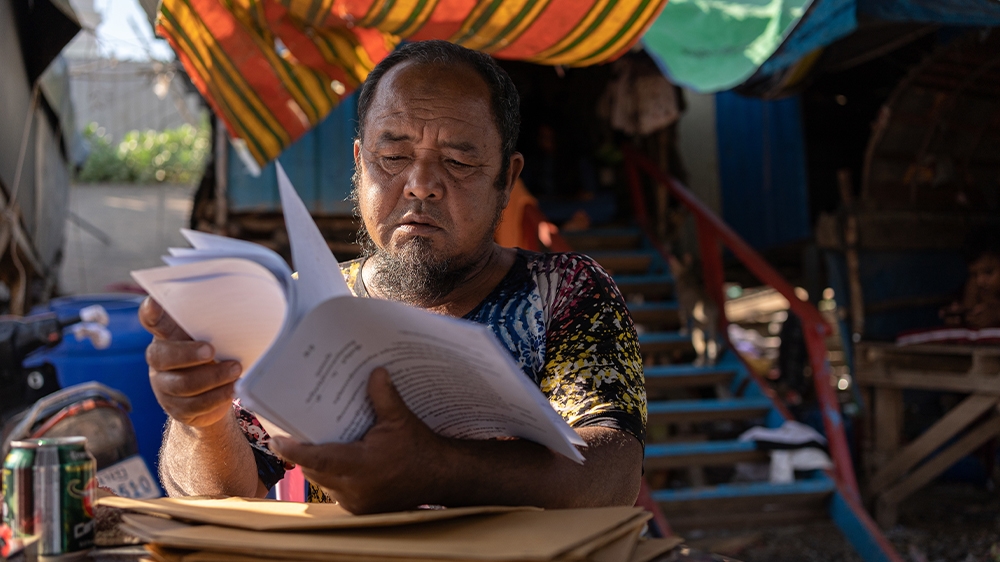 During the ASEM Summit next year, 30 European and 21 Asian leaders will gather to discuss the political and economic future of the world – against the backdrop of the Cham community’s former neighbourhood.

Imam and community leader You said he had scouted some suitable land about 20km (12 miles) away, near another Cham community.

Another suitable plot of land he found was cheaper but lacked education and religious facilities for the community.

Researcher Farina So said the sense of community is important to many of the Cham people.

“Many Cham still prefer to live in community or around mosque rather than scattering in the city or mingle with other ethnic groups,” she told Al Jazeera in an email. 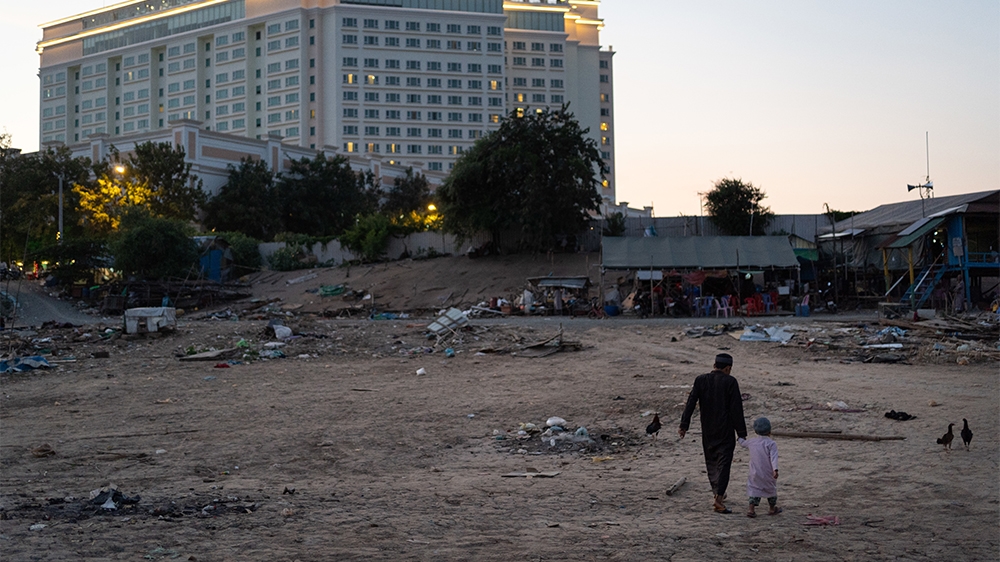 A Cham man and his son walk through the remains of the community’s homes to the local mosque for evening prayer. Overlooking the area is the Sokha hotel, where the ASEM summit will be held [Thomas Cristofoletti/Ruom via Al Jazeera]

For You, it is hard to maintain this sense of community. Having been forced from their homes three times since 2008, he and his family settled in the area in 2010.

“The relocation was painful, because [the authorities] just came and cut the ropes of our boats, and the boats floated to the river. We didn’t know where to go.”

But beyond the sense of community, You’s wife Sor Srey Nop explained, it was almost impossible for their children to go to school without a permanent home, and the impending relocation could shatter anew any dreams of education.

“I don’t want my children to be illiterate like me. I don’t even know how to read numbers,” she said.

“Our youngest daughter, she wants to study so badly that when she heard that we’ll have to relocate,” she cried.