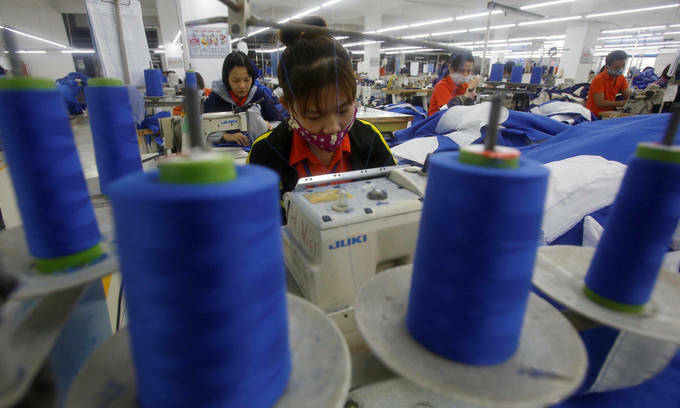 Women work at a garment factory in northern Vietnam. Photo by Reuters.

Normally, by the end of a year they would have enough orders for the whole of the following year, Nguyen Van Thoi, chairman of TNG Investment and Trading JSC, which makes garments, said.

But this year many businesses have said they do not have enough orders for 2020, with some reporting a 20 percent drop in orders from last year. Besides, many have not signed long-term contracts for products, only monthly or quarterly, he said.

A Vietnam Textile and Apparel Association (VITAS) official, who wished not to be named, said many orders have shifted to emerging countries in Africa, while competition with textiles superpowers like China, India and Bangladesh is becoming increasingly fierce.

“Even China’s orders are being transferred to countries with preferential tariff rates such as Bangladesh and Cambodia.”

Not only Vietnamese textile and garment producers, but also its fiber industry is facing increasing competition from foreign businesses and rivals in countries such as India, Thailand and Indonesia, he added.

Experts had forecast at the beginning of the year that the U.S.-China Trade war and new free trade agreements (FTAs) signed by Vietnam would help it increase textile exports, but had done a U-turn by mid-year to say there would be a lack of orders, VITAS said.

This is due to a slowdown in the global economy, affecting consumer demand, and failure by Vietnamese enterprises to adopt radical solutions to comply with FTAs’ rules of origin, VITAS explained.

In June Vietnam signed the Vietnam-EU Trade Agreement (EVFTA), which has strict rules of origin like requiring domestic value to account for at least 42.5 percent of the ex-works price of a final textile product.

If this condition is met, goods exported from Vietnam to the EU would be tax-free once the EVFTA comes into effect whereas the average tariff levied by the bloc now is 9.6 percent.

Some 70 percent of the fabric used to produce garments in Vietnam is imported from mainland China or Taiwan, VITAS chairman Vu Duc Giang said.

Other difficulties being faced by Vietnam’s textile industry include rising costs of raw materials from China and lower prices demanded by foreign buyers.

Vietnam is losing its low labor cost edge over other countries even as its use of technology in production remains limited, leading to reduced competitiveness, VITAS said.

Garment exports in the first 11 months of this year were up nearly 8 percent year-on-year to $30 billion, according to figures from the Ministry of Industry and Trade.