Mainland Southeast Asia remains a hotspot for illegal drug manufacturing, and Vietnam is emerging as a transit hub. 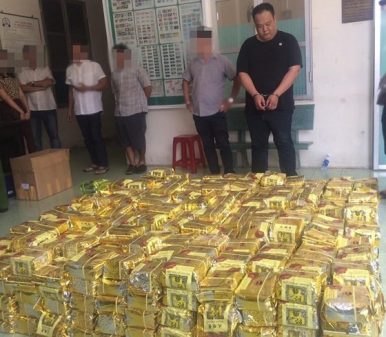 Although Vietnam has some of the world’s most stringent drug laws — those convicted of possessing or smuggling more than 600 grams of heroin or more than 2.5 kilograms of methamphetamine face death – the country has also been facing the existence of a key smuggling and trafficking hub for illegal drugs around the Golden Triangle, at the intersection of China, Laos, Thailand, and Myanmar. The Golden Triangle is the world’s second-largest drug producing region, and the effects are being felt in Vietnam.

According to the annual report from the United Nations Office on Drugs and Crime (UNDOC) issued in March 2019, the number of amphetamine-type stimulants (ATS) and new psychoactive substances (NPS) seized in East Asia and Southeast Asia in 2018 reached a record of 116 tons, an increase of 210 percent compared to five years ago. For another comparison, the amount seized in arrests in 2017 was 82 tons. Based on the aggregate data of the Global SMART Programme, ASEAN countries, along with China, Korea, and Japan, are seeing drug markets shift from heroin to ATS. In Vietnam, large quantities of methamphetamine perceived to have originated from the Golden Triangle have increasingly been smuggled and trafficked across Vietnam’s border to and from its neighbors, including Cambodia, China, and Laos. 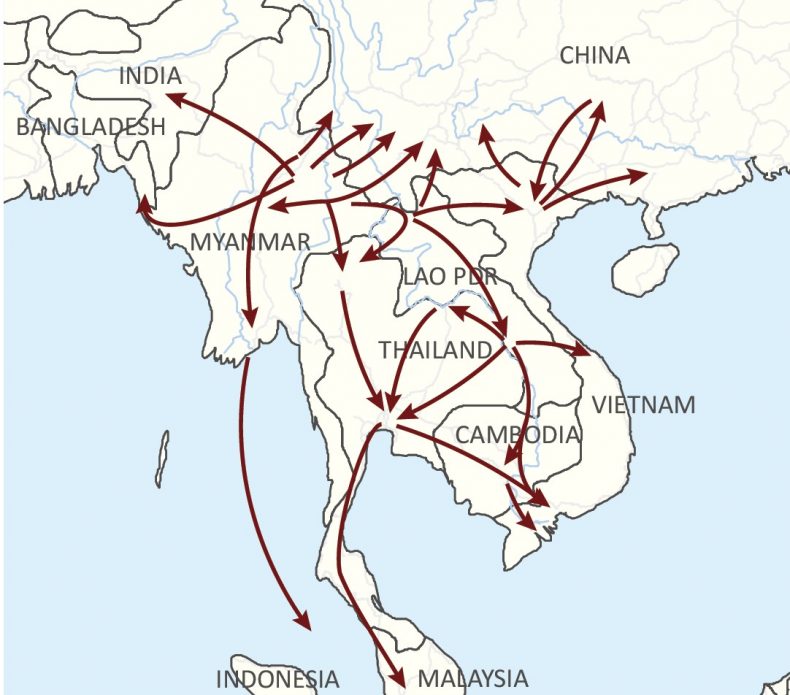 Until last year, methamphetamine was mainly smuggled from supplies in Myanmar, through Chiang Mai and Bangkok in Thailand, then to Indonesia and Malaysia to reach consuming countries. Shipments were even transported to Australia, where law enforcement agencies seized 1.2 tonnes in Western Australia in December 2017 and 0.9 tonnes in April 2018 in Melbourne. Although the Golden Triangle is no longer the primary source of opium for the whole world, after being replaced by Afghanistan in the early 21st century, this region became the world’s most active manufacturer and exporter of synthetic drugs, concentrated around Myanmar’s chaotic, conflict-filled border regions. When the Thai government’s fierce repression forced drug traffickers to change their shipping routes, supplies began moving from Myanmar toward Laos, Cambodia, and then through Vietnam.

On March 25 in Hanoi, Vietnam’s Ministry of Public Security (MPS) held a press conference on the preliminary work of drug enforcement agencies (DEAs). According to data given at the press conference, in the first quarter of 2019 alone, law enforcement forces nationwide investigated 6,552 drug-related crimes and seized more than 6 tons of illegal drugs — more than the number of cases and quantities seized in all of 2018.

The risk of Vietnam becoming a drug transit hub not new. In my previous research centered on the Vietnam-Laos border, particularly at the triangle point in the northwestern area between Son La, Dien Bien, and Lai Chau, I found that DEAs in Vietnam face several challenges in responding to transnational drug trafficking from Golden Triangle markets. Most traffickers take advantage of difficult geographical, topographical, and climatic conditions across Vietnam’s other shared borders — with China in the north and Cambodia in the south – which provide many official as well as unofficial pathways to transport illegal drugs to and/or through Vietnam and beyond.

In 2014, in one of the biggest-ever drug cases in Quang Ninh province on the border with China, the anti-narcotics police forces of Vietnam cooperated with their Chinese counterparts to investigate and prosecute 89 suspects for trafficking over 12 tonnes of heroin. Thirty people were given the death penalty. The drug lord in Vietnam had colluded with Chinese and Laotian traffickers to make the four biggest networks across all three countries for transporting and trading illegal drugs between 2007-2012.

The problem continues today. In the first months of 2019, more than one ton of meth was seized after a five-month operation by law enforcement, with 300 kilograms of meth taken in Ho Chi Minh City (HCMC), 309 kg in Quang Binh, nearly 300 kg in Ha Tinh and more than 270 kg on the way to the Philippines. This network was organized and led by a Chinese suspect, who had come to Vietnam under the legal pretext of operating the Hasan garment company registered in the name of his Vietnamese girlfriend. At that time, the DEAs arrested 16 Chinese, three Vietnamese, and one Laotian trafficker and is continuing its investigation and looking to track down more gang members. This illegal drug trafficking and transporting route spanned from the Golden Triangle area (Myanmar) to Laos via Bo Y international border gate in Kon Tum province. After reaching Vietnam, part of the drugs headed to sea from Ho Chi Minh City’s Cat Lai port, bound for Manila.

Between April 12 and 17 2019, DEAs have continued to combat transnational drug trafficking across the Vietnam-Laos borders. In three cases during that period, law enforcement seized two tonnes of ATS and heroin, around 1,110 kg of methamphetamine, and just under a kilogram of ketamine in Ho Chi Minh City, plus over 1,300 kg of crystal meth and 100 blocks of heroin in Nghe An province. All three drug smuggling operations used a similar modus operandi — camouflaging drugs in tea bags marked with the Daguanyin brand and then concealing them in barrel speakers – and were led by Taiwanese organizers acting with Vietnamese subordinates.

With DEAs fiercely combating drug trafficking along Vietnam’s borders with Laos and China in the northern and central northern region, drug lords have shifted toward southern routes.  That’s why recently Ho Chi Minh City has emerged as a drug transit hub for Vietnam and beyond. According to, General Minh, the deputy director of police, Ho Chi Minh City offers an attractive package for drug dealers: excellent transportation connections, weak foreign currency payment controls, and ineffective operations at port customs. The general highlighted that Hanoi does not have any seaports, making it a less attractive smuggling option.

Vietnam has already built up a national program and strategies to prevent, combat, and control drugs through 2030, focusing on three pillars – supply, demand, and harm reduction. Under this framework, community-based policing will be one of the most essential and central tasks to fight drug trafficking, with the priority being to prevent and control drug flows across Vietnam’s borders. However, these illicit drug networks have proven quite adaptable at every step of stockpiling, transporting, and trading among countries. As a result, the limited efforts of a lone country such as Vietnam are ineffective. International cooperation should be strengthened, and regional countries need to fulfil their international commitments in combating international drug syndicates.

Both ATS and NPS are coming to all these countries, and, thanks to their readily available precursor ingredients, will become a significant obstacle to anti-drug efforts in the Greater Mekong subregion. In 2017, Vietnam’s MPS reported there were at least 223,000 drug addicts in the country, and about 1,600 people die of a drug overdose in Vietnam each year.

Many countries in the region have drug data, including Vietnam, but have forgotten to collect data on precursor trafficking. In fact, the precursors needed to make ATS and NPS are available in large numbers in the region because Asian countries, especially China and India, are the world’s chemical supply centers. In Vietnam, meanwhile, the precursors are not banned but are widely used in the pharmaceutical and chemical industries. Every time a precursor is listed as a controlled substance by the United Nations, drug dealers always find new substances to create synthetic drugs. Therefore, countries need to coordinate closely and regularly update the list of banned chemicals. In Vietnam, over the last three years, hundreds of new types of ATS and NPS have been found, and the numbers are growing rapidly: from 292 types in 2015 to 559 types in 2017. Tracking the many variations of these drugs is necessary to understand precisely what precursors are being used.

Meanwhile, the borders between countries along the Mekong River remain weak and easy to overcome. Collaborative support among border patrols is still insufficient and needs to be strengthened. Since the October 2011 murder of 13 Chinese sailors traveling down the Mekong River, China has encouraged and cooperated with Laos, Myanmar, and Thailand in the Joint Patrol Team; there have been 81 of these joint patrols as of April 2019. But paradoxically, although both Cambodia and Vietnam are at the end of the Mekong River, they are still not involved directly in this program. Here again regional cooperation needs a boost to truly combat the drug smuggling routes.

Dr. Hai Thanh Luong is an Honorary Principal Research Fellow at the School of Global, Urban, and Social Studies, RMIT University, Australia. His recent book to investigate transnational narcotics trafficking across the Vietnam-Laos border has published by Palgrave MacMillan (2019).