The US Navy is planning two major visits to Vietnam this year as part of efforts to strengthen maritime relations between the two armies. 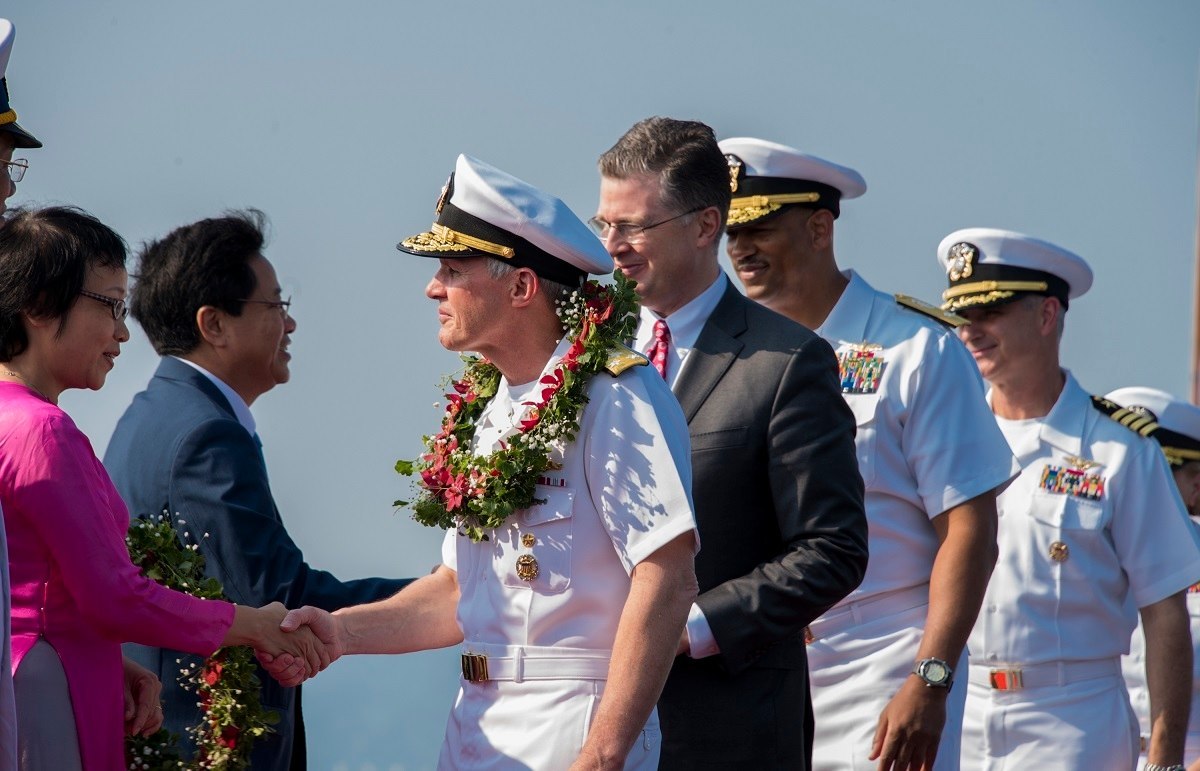 Vietnamese officials welcome US delegation on the visit of USS Carl Vinson to Danang in March 2018. Photo: Navytimes

The US “would welcome the opportunity for another aircraft carrier visit to Vietnam this year,” saying that the move shows the mutual respect that each nation has for each other and the depth of the two countries’ growing partnership, Commander of US Indo-Pacific Command Admiral Philip Davidson said at a press meeting in Ho Chi Minh City on April 18, VnExpress reported.

On April 17 in the central province of Khanh Hoa, which is home to major military bay of Cam Ranh, the admiral told the press that the US Navy wants to send a vessel and crew to Khanh Hoa for an official visit this September and before that, a US aircraft carrier might pay a visit to the province in the summer.

The US’s key support to Vietnam will cover maritime security and maritime domain awareness defined by the International Maritime Organization as the effective understanding of anything associated with the maritime domain that could impact the security, safety, economy, or environment.

Accordingly, the US will focus on improving Vietnam’s military capacities and pursuing the military training and cooperation which are included in Washington’s security priorities in 2019.

The admiral said the US-Vietnam defense cooperation was based on common strategic interests in upholding Vietnam’s sovereignty and independence and promoting a rules-based international order.

Philip Davidson stressed that “I commend Vietnam for taking a vocal stand against the malign influence that seeks to constrain international access to the East Sea,” he said, using the Vietnamese name for the South China Sea.

The US admiral expressed specific concerns about China’s recent moves, saying that “the militarization by China of the East Sea is concerning not only because of the global economic implications, but for what it suggests about the nation’s broader intent to reshape the international rules-based order that has enabled the astonishing economic rise of this region.”

He said China seeks to weaken regional order and the sovereignty of countries, international rights to the global commons as well as the flourishing network of allies, partners and friends who seek a free and open Indo-Pacific. It also seeks to undermine institutions such as Association of Southeast Asian Nations (ASEAN) and its member states.

Chinese expansionism affects the security and the right of all nations to trade, to communicate, to develop their natural resources, and to send their financial information and communications through cables under the sea, the admiral said.

In March 2018, the USS Carl Vinson docked in Vietnam’s Danang, marking the first visit by a US military aircraft carrier since the end of the Vietnam War in 1975, underscoring the growing strategic ties between the former foes.

An official from Boeing revealed in late March that the US company is close to sealing a deal to sell unmanned aerial vehicles (UAVs), the Boeing Insitu ScanEagle, to Vietnam.

Last August, a local newspaper quoted an unnamed US State Department official as saying that Vietnam had signed contracts to buy US military equipment worth $94.7 million. Vietnam’s Foreign Ministry has neither confirmed nor denied the information.

National defense cooperation between the US and Vietnam accelerated in 2017 when the US transferred a Coast Guard cutter to Vietnam.

The two countries will mark 25 years of normalization of diplomatic relations next year.