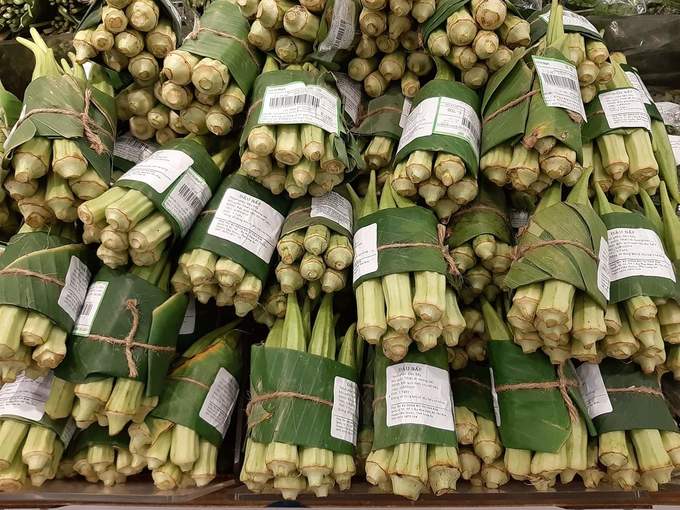 A representative of the supermarket chain said that the company is experimenting with using leaves to wrap veggies in one outlet, and plans to expand this later to the entire chain in the country.

This is part of a plan to increase the use of environment-friendly products, not just for vegetables but also for fresh meat, the representative added.

Local shoppers expressed support for the move. “When I see vegetables wrapped in these beautiful banana leaves I’m more willing to buy in larger quantities. I think this initiative will help locals be more aware of protecting the environment,” said Hoa, a District 7 resident.

Saigon Co.op is also using banana leaves to wrap vegetables to replace their biodegradable wraps in some of its outlets in HCMC and other southern localities of Phan Thiet, Tay Ninh, Quy Nhon and Tam Ky.

The Big C supermarket chain in Hanoi has also started using banana leaves to wrap veggies since Monday, and plans to do so in its central and southern supermarkets in the next few days. The trial is set to last a month.

The supermarket chains are also providing customers with other environmental-friendly products. Lotte Mart said it is selling paper straws and food boxes made with sugarcane waste. Eggs are wrapped in paper packages instead of plastic boxes.

Big C is offering shoppers bags made with corn powder which is completely biodegradable.

These moves come after report highlights the large amount of plastic waste generated by Vietnamese people. The country disposes about 2,500 tons of plastic waste a day, according to official figures.

Vietnam ranks fourth globally in the amount of plastic waste dumped into the ocean, according to the United Nations Environment Programme (UNEP).

Some local cafes and restaurants have also been encouraging the reduction of plastic use by offering straws made with recyclable or biodegradable materials.