When the East Wind locomotive rumbles into east London this week, it will be at the head of 34 carriages full of socks, bags and wallets for London’s tourist souvenir shops, as well as the dust and grime accumulated through eight countries and 7,456 miles.

The train will be the first to make the 16-day journey from Yiwu in west China to Britain, reviving the ancient trading Silk Road route and shunting in a new era of UK-China relations.

Due to arrive on Wednesday, the train will have passed through China, Kazakhstan, Russia, Belarus, Poland, Germany, Belgium and France before crossing under the Channel and arriving in the east end of London at Barking rail freight terminal. 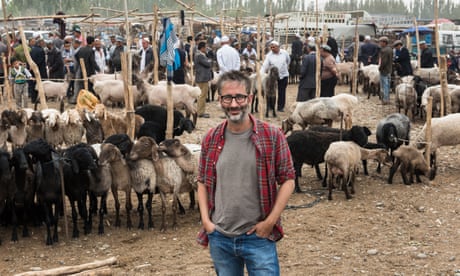 David Baddiel on the Silk Road

Faster than a ship, cheaper than a plane, the East Wind won’t be quite the same train that left Yiwu on 2 January. Differing rail gauges in countries along the route mean a single locomotive cannot travel the whole route. But the journey still marks a new departure in the 21st-century global economy. The new train, which will start to run weekly while demand is tested, is part of China’s One Belt, One Road policy – designed to open up the old Silk Road routes and bring new trade opportunities, said Prof Magnus Marsden, an anthropologist at Sussex University’s School of Global Studies, who has been studying the trading patterns in Yiwu. China Railway has already begun rail services to 14 European cities, including Madrid and Hamburg. As a result, Yiwu’s markets are now loaded with hams, cheese and wine from Spain and German beer is available on every corner.

“It’s a new economic geography,” he said. “This is the first train to the UK, but very much part of a new type of commercial route. The commodities are small. It’s not the big corporates who will be using this train, so it’s very much in the tradition of the Silk Road, giving opportunities for those who are in fact the inheritors of those ancient traders today.” Yiwu is a gigantic bazaar, he said, where traders from all over the world congregate. The goods brought to Britain by the East Wind are not as exotic as the peacocks and gemstones that were once transported along the Silk Road, which ran through Europe and Eurasia’s historical dynasties and empires. The trading route, thought to have been established in around 200BC, brought the west textiles, exotic foods, paper making – and probably the Black Death.

Everything from chairs to illicit drugs were sent back the other way. On one occasion China threatened Queen Victoria that it would stop exporting her favourite rhubarb to England if she didn’t do something about the British opium trade. “Yiwu made its name internationally as a city in which traders could buy affordable commodities in bulk,” said Marsden. “The city’s early trade was mostly with markets in Asia, Africa, Latin America and eastern Europe. From the sprawling container markets of the former Soviet Union to the bazaars of the Middle East, commodities purchased in Yiwu have both made and unmade people’s lives. These products have contributed to the demise of local industries, yet have also had a hand in the resurrection of great trading cities that had fallen into decline, the Black Sea port of Odessa in Ukraine, or Sulaymaniyah in Iraq being such examples.”

Eurasia is an idea whose time has come around again

Today Yiwu’s streets are among the most cosmopolitan in the world, full of traders from Colombia, Afghanistan, Kurdistan, Pakistan, India, Syria, Angola and Ukraine, and could now be attracting a few from the UK as well.

In Barking there is great excitement over the arrival of the East Wind, the name of which references the Chinese communist leader Mao Zedong, who famously said: “The east wind will prevail over the west wind.”

“The new service has a very quick transit time,” operations director, Mike White, told the Railway Gazette. “We believe this is going to change the way a lot of forwarders and shippers view their imports and exports for China.”