We start with a review of short-term issues in the oil, gas and electricity markets. Bassam Fattouh and
Andreas Economou consider the outlook for oil demand over the next 12 months and discuss the ability
of OPEC+ producers to manage a gradual increase in production to balance the market, even as
demand growth is expected to soften. Their conclusion is that the oil price will remain within a $70-90
per barrel range, while refilling depleted storage will be a key issue. Price volatility, in light of
considerable uncertainty about both supply and demand, as well as political responses to high prices
will remain dominant issues in 2022. Anupama Sen, David Robinson and Rahmat Poudineh then
discuss government responses to current electricity price volatility, using the UK and Spain as examples
of different responses to providing protection for low-income consumers. They see the issue becoming
increasingly relevant as the energy transition progresses and suggest that government intervention
could become less and less effective unless energy policy is well designed.
In a somewhat similar vein, Mike Fulwood and Jack Sharples consider the outlook for gas prices and
supply to Europe and the implications for the global LNG market. Replenishing European storage will
be a critical issue in 2022, with LNG supply, Asian demand and pipeline exports from Russia being key
drivers to watch.

END_OF_DOCUMENT_TOKEN_TO_BE_REPLACED

By capturing 40 pieces of data per person—from iris scans and family links to their favorite fruit—a system meant to cut fraud in the Afghan security forces may actually aid the Taliban.By

As the Taliban swept through Afghanistan in mid-August, declaring the end of two decades of war, reports quickly circulated that they had also captured US military biometric devices used to collect data such as iris scans, fingerprints, and facial images. Some feared that the machines, known as HIIDE, could be used to help identify Afghans who had supported coalition forces.

According to experts speaking to MIT Technology Review, however, these devices actually provide only limited access to biometric data, which is held remotely on secure servers. But our reporting shows that there is a greater threat from Afghan government databases containing sensitive personal information that could be used to identify millions of people around the country.

MIT Technology Review spoke to two individuals familiar with one of these systems, a US-funded database known as APPS, the Afghan Personnel and Pay System. Used by both the Afghan Ministry of Interior and the Ministry of Defense to pay the national army and police, it is arguably the most sensitive system of its kind in the country, going into extreme levels of detail about security personnel and their extended networks. We granted the sources anonymity to protect them against potential reprisals.

END_OF_DOCUMENT_TOKEN_TO_BE_REPLACED

Following years of effort, in 2015 Vietnam concluded negotiations for the Trans-Pacific Partnership (TPP) trade deal. After the US withdrawal from the trade pact, Vietnam worked with the remaining members to revive it under the name of the Comprehensive and Progressive Agreement for Trans-Pacific Partnership (CPTPP). Indeed, Vietnam was the seventh member to ratify the CPTPP.

END_OF_DOCUMENT_TOKEN_TO_BE_REPLACED

A school of Japanese amberjack at the north-east coast of Taiwan. A new report warns that ocean warming and acidification are affecting the behaviour of fish. Copyright: Vincent C. Chen(CC BY SA 4.0).

[NEW YORK] Ocean acidification and global warming are interfering with the way fish interact in groups, posing a threat to their survival which could affect seafood supplies, researchers say.

Marine ecosystems worldwide have shown an increased dominance of warm water species following seawater temperature rise, with parallel changes in the species composition of fish catches since the 1970s, according to a report by the Intergovernmental Panel on Climate Change (IPCC).

END_OF_DOCUMENT_TOKEN_TO_BE_REPLACED

Heated maritime and territorial disputes conceal the severe damage being done beneath the waves.

Much of the focus on the South China Sea over the past decade has centered around the nationalistic territorial disputes between China and four Southeast Asian claimants and a geopolitical tussle between China and the United States over freedom of navigation in the contested waters. What is going on beneath the surface of the sea – overfishing, destruction of coral reefs, climate change, plastics pollution, ocean acidification – is equally threatening and may have a longer-term impact on the survivability of the sea with its rich fishing beds, potential gas and oil reserves, and bustling sea lanes.

END_OF_DOCUMENT_TOKEN_TO_BE_REPLACED “Maritime Security” has emerged as a central concept in Southeast Asia’s policy lexicon. However, as is the case in much of the world, the term’s precise meaning is not consistently clear. Which challenges and state activities should be categorized as maritime security and which should be considered elements of another domain is generally ambiguous. This ambiguity can be useful to leaders seeking to build unity of action among government agencies with overlapping maritime policy mandates and to diplomats seeking to rely on euphemistic qualities to support flexible political narratives that minimize the risks associated with security dilemmas.  However such linguistic polysemy only works for so long and introduces risk. Left unclarified, terms will develop assumed meanings. For example, many Southeast Asians regard contemporary American talk about maritime security as a thin veil for something better understood as “Great Power Competition at Sea.” Therefore, even the most benign initiatives are factored into regional calculations aimed at balancing between external powers. Within the region, it is also possible for lexical disconnects to lead to problematic misinterpretations of policy intent and diplomatic signals.

Recognizing that understanding the varied conceptualizations of maritime security is an academic puzzle with real-world practical implications in Southeast Asia, the S. Rajaratnam School of International Studies convened a roundtable of experts to take stock of regional maritime security definitions. These specialists surveyed national policy documents and policymaker discourse to assess how maritime security is defined, used, and conceptualized in seven key Southeast Asian coastal states (the Philippines, Vietnam, Brunei, Malaysia, Indonesia, Singapore, and Thailand), ASEAN as a multinational institution, and the Quad members (Australia, Japan, India, and the United States). This stocktaking enabled the team to identify and discuss the significance of the convergences and divergences. Noting the transnational nature of discourse, the phrase “Southeast Asian conceptualizations” was adopted as a shorthand.  This does not specifically mean usage by Southeast Asian individuals or the region’s national governments but refers to the security-related discourse taking place in the region.  While the primary goal of the project was to improve communication by providing common reference points, the project also discovered findings of practical policy importance.

Discussions of each country’s conceptualization of maritime security and the implications of the term’s varying definitions across the region are available in the following 14 article series:

The Philippines’ Conceptualizations of Maritime Security by Jay Batongbacal

The United States’ Conceptualization of Maritime Security by Blake Herzinger

Maritime Security Conceptualizations in Southeast Asia: The Implications of Convergence and Divergence by John Bradford

END_OF_DOCUMENT_TOKEN_TO_BE_REPLACED 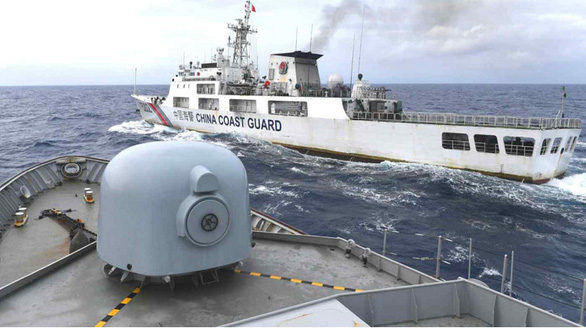 END_OF_DOCUMENT_TOKEN_TO_BE_REPLACED

Analysis by Laura He, CNN Business

Hong Kong (CNN Business)For many companies, doing business in China is getting trickier by the day. But Western banks and asset managers are more than willing to up their bets on the world’s second biggest economy, convinced that the opportunities remain too good to pass up.Major banks in recent weeks have inked deals to expand their footprint in China — or are otherwise attempting to take greater control of their businesses there — after years of being forced to enter the market via joint ventures. That’s despite fraught geopolitics, a slowing economy and an increasingly hostile environment for private business.Late last month, HSBC (HBCYF) received approval from Chinese regulators to take full control of its life insurance joint venture, which was created in 2009 in equal partnership with a Chinese company under rules that were rolled back in 2020. The bank said the move underscored its “commitment to expanding business in China.”