END_OF_DOCUMENT_TOKEN_TO_BE_REPLACED

Tokyo (VNA) – A Japanese researcher has just announced a project on training Vietnamese health workers in addressing problems related to Agent Orange (AO)/dioxin chemical that was sprayed on the country during the war.

In the thriving industrial city of Bien Hoa, about 20 miles east of Ho Chi Minh City, the former Saigon, there is a large air base, just beyond a sweeping bend in the Dong Nai River. During the American war in Vietnam, it was said to be the busiest airport in the world. Since the war ended in 1975, a dense cluster of four residential neighborhoods has grown up around the base. Their total population is perhaps 111,000, while the base itself, now home to advanced long-range fighter-bombers of the Vietnam People’s Air Force, has another 1,200 permanent residents. END_OF_DOCUMENT_TOKEN_TO_BE_REPLACED

On a mild, sunny morning last November, Chuck Searcy and I drove out along a spur of the old Ho Chi Minh Trail to the former Marine base at Khe Sanh, which sits in a bowl of green mountains and coffee plantations in Vietnam’s Quang Tri province, hard on the border with Laos. The seventy-seven-day siege of Khe Sanh in early 1968, coinciding with the Tet Offensive, was the longest battle of what Vietnamese call the American War and a pivotal event in the conflict. By the off-kilter logic of Saigon and Washington, unleashing enough technology and firepower to produce a ten-to-one kill ratio was a metric of success, but the televised carnage of 1968, in which 16,592 Americans died, was too much for audiences back home. After Tet and Khe Sanh, the war was no longer America’s to win, only to avoid losing. END_OF_DOCUMENT_TOKEN_TO_BE_REPLACED

The toxic legacy of the Vietnam War

The US has launched a multi-million dollar clean-up operation at an air base in Vietnam it used to store the notorious chemical Agent Orange.

The ten-year programme, unveiled more than four decades after the end of the Vietnam War, will cost $183m (£141m).

The site at Bien Hoa airport, outside Ho Chi Minh City, is considered the most contaminated in the country. END_OF_DOCUMENT_TOKEN_TO_BE_REPLACED Speaking at the ceremony, Nga said that this is one of the highest decorations that the Vietnamese state presents to individuals and organisations who have made significant contributions to the friendship between Vietnam and countries worldwide. END_OF_DOCUMENT_TOKEN_TO_BE_REPLACED

Tackling war legacies has required both time and efforts that neither Hanoi nor Washington have been reluctant to do over the past decades, making the relationship a case study of foe-turned-friend. END_OF_DOCUMENT_TOKEN_TO_BE_REPLACED

END_OF_DOCUMENT_TOKEN_TO_BE_REPLACED 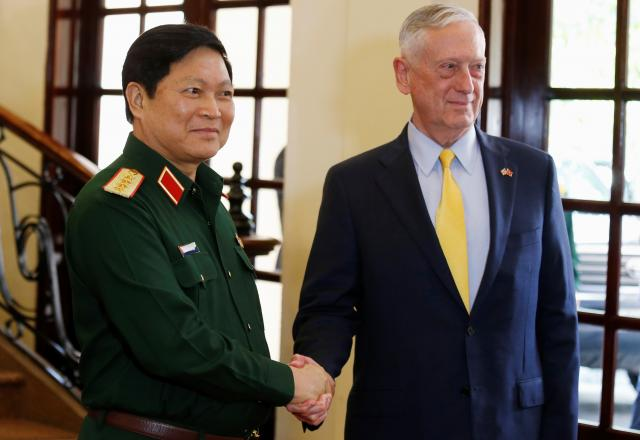 BIEN HOA AIR BASE, Vietnam (Reuters) – U.S. Defense Secretary Jim Mattis on Wednesday visited a former American air base in southern Vietnam that will soon become the biggest-ever U.S. cleanup site for contamination left by the defoliant Agent Orange during the Vietnam War.

Standing near a skull-and-crossbones warning sign meant to keep people away from toxic soil, Mattis was briefed by Vietnamese officials about the massive contamination area. END_OF_DOCUMENT_TOKEN_TO_BE_REPLACED