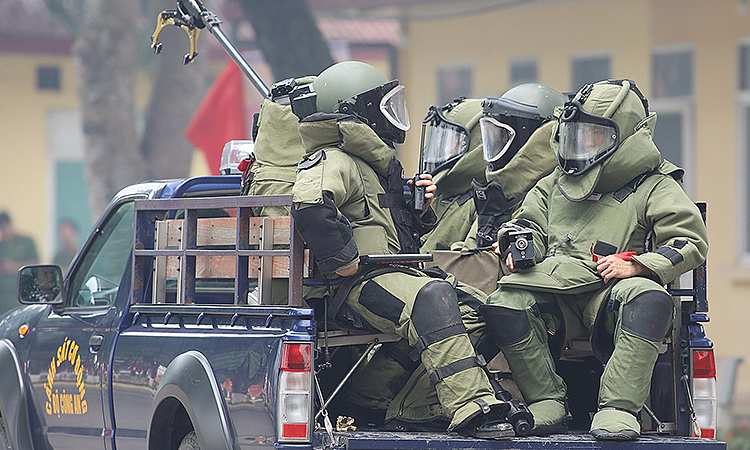 Vietnamese police during a drill in Hanoi in 2019. photo by VnExpress/Ngoc Thanh.

Vietnam is 10th in this year’s Global Law and Order index that measures people’s perceptions of personal security.

For the report published earlier this week, American analytics firm Gallup asked nearly 175,000 people in 144 countries and territories via telephone and in person about their “confidence in their local police, their feelings of personal safety, and the incidence of theft and assault or mugging in the past year.”

END_OF_DOCUMENT_TOKEN_TO_BE_REPLACED
01.11.2020 ~ Đào Thu Hằng ~ Bình luận về bài viết này
Mckinsey.com
In just a few months’ time, the COVID-19 crisis has brought about years of change in the way companies in all sectors and regions do business. According to a new McKinsey Global Survey of executives,1 their companies have accelerated the digitization of their customer and supply-chain interactions and of their internal operations by three to four years. And the share of digital or digitally enabled products in their portfolios has accelerated by a shocking seven years.2 Nearly all respondents say that their companies have stood up at least temporary solutions to meet many of the new demands on them, and much more quickly than they had thought possible before the crisis. What’s more, respondents expect most of these changes to be long lasting and are already making the kinds of investments that all but ensure they will stick. In fact, when we asked executives about the impact of the crisis on a range of measures, they say that funding for digital initiatives has increased more than anything else—more than increases in costs, the number of people in technology roles, and the number of customers.To stay competitive in this new business and economic environment requires new strategies and practices. Our findings suggest that executives are taking note: most respondents recognize technology’s strategic importance as a critical component of the business, not just a source of cost efficiencies. Respondents from the companies that have executed successful responses to the crisis report a range of technology capabilities that others don’t—most notably, filling gaps for technology talent during the crisis, the use of more advanced technologies, and speed in experimenting and innovating.3 END_OF_DOCUMENT_TOKEN_TO_BE_REPLACED
01.11.2020 ~ Đào Thu Hằng ~ Bình luận về bài viết này

“2020 is another year that is consistent with a rapidly changing Arctic. Without a systematic reduction in greenhouse gases, the likelihood of our first ‘ice-free’ summer will continue to increase by the mid-21st century,’ he wrote in an email to the Guardian. END_OF_DOCUMENT_TOKEN_TO_BE_REPLACED

The unexpected visit by US Secretary of State Michael Richard Pompeo to Vietnam reflects the development of Vietnam – US relations. Pompeo’s visit to Vietnam took place after his visits to four Asian countries.

According to the Vietnamese Ministry of Foreign Affairs, at the invitation of Deputy Prime Minister and Foreign Minister Pham Binh Minh, US Secretary of State Michael Richard Pompeo officially visited Vietnam on October 29-30 to celebrate the 25th anniversary of Vietnam-US diplomatic relations.