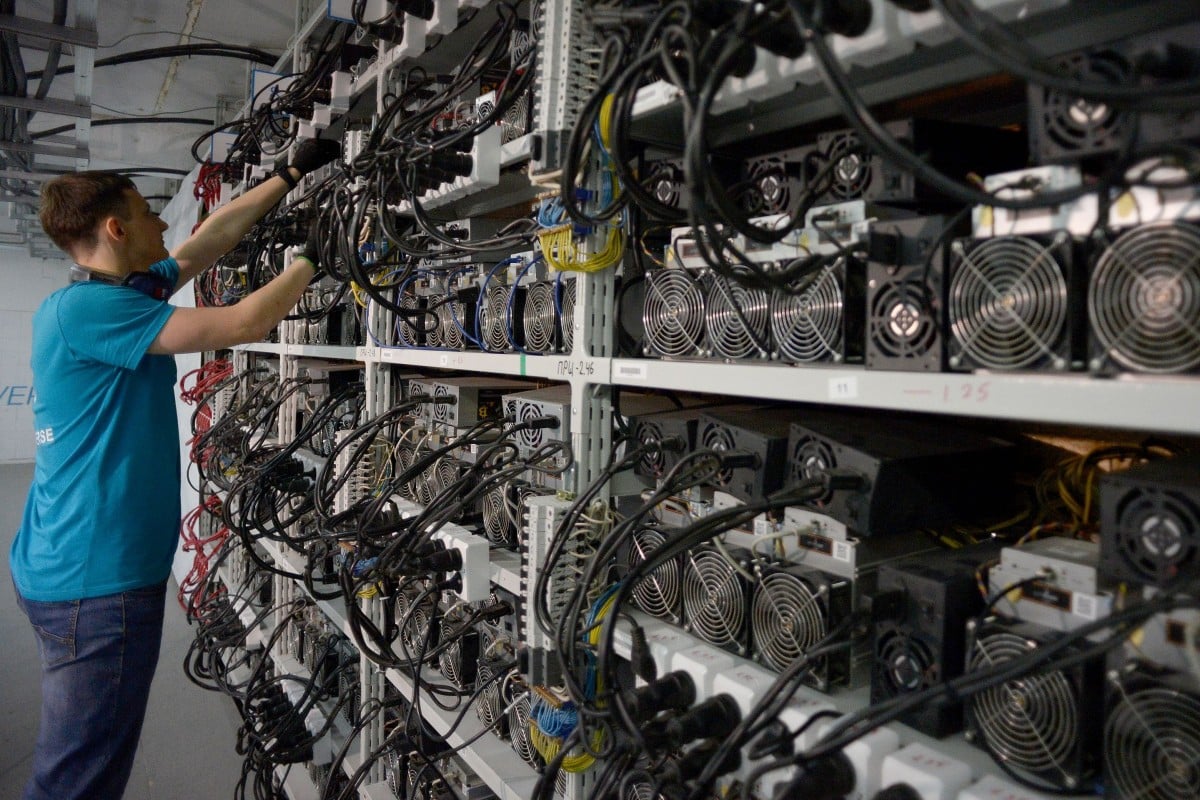 An employee inspects machines for the production of bitcoin and lightcoins. Photo: AFP

China’s top economic planning body has proposed new rules that would see the closure of all local cryptocurrency mining facilities if enacted – a move that would potentially end the country’s dominance in the energy-hungry, yet lucrative industry.

The National Development and Reform Commission (NDRC) on Monday

to its guidance for adjustments to the nation’s industrial structure, including categories that are encouraged, restricted and eliminated. Cryptocurrency mining was included among sectors to be eliminated immediately. The new list is under public consultation until May 7.

The NDRC did not immediately respond to a request for comment sent via a message board on its website.

Cryptocurrency mining is the process of validating transactions in digital forms of money like bitcoin and ethereum in exchange for new coins given as a reward. The specialised computers used for the mining activity consume large amounts of electricity.

Industries in the eliminated category include those seen as wasting energy or polluting the environment, according to

in 2005. Investment and loans in those industries are banned. During the elimination period, authorities are allowed to raise electricity prices for relevant businesses to force them to close. The manufacturing, sale, and use of products in the eliminated categories are also prohibited.

China is home to some of the world’s largest cryptocurrency mining farms – data centres hosting the mining rigs – thanks to cheap electricity in the country’s coal-rich Xinjiang and Inner Mongolia regions. In recent months, Chinese miners are known to have deployed machines in the southern Yunnan and Sichuan provinces to take advantage of the even cheaper hydropower available there during the rainy season.

If the new rules are enacted, Chinese miners will have to give up their bases in Yunnan and Sichuan and move operations to foreign countries, said Michael Zhong, an analyst with Beijing-based cryptocurrency research firm TokenInsight.

“Bitcoin mining will no longer be dominated by China but become more decentralised,” he said.

This is not the first time authorities have cracked down on cryptocurrency mining. In January last year, China’s top internet-finance regulator issued a notice demanding companies carry out an “orderly exit” from the business, citing risk of speculation of virtual currencies, according to internal documents leaked online at the time. Although the order was not followed through, it spurred many local miners to scout for backup options in countries like the US and Canada.

In addition to the immediate risk to mining farms, the new rules also bring uncertainty to Chinese makers of cryptocurrency mining rigs including Beijing-based Bitmain Technologies, which in 2017 controlled an estimated three quarters of the global market. By mid-2018, the company also operated 11 mining farms in China, mainly located in Sichuan, Xinjiang, and Inner Mongolia, according to a prospectus issued for a possible IPO filing, which expired last month.

In September 2017, China banned cryptocurrency exchanges that served local customers, spurring a plunge in bitcoin prices at the time.

Bitcoin, the world’s most traded cryptocurrency, is now at around US$5,200, its highest level in four months.