In the thriving industrial city of Bien Hoa, about 20 miles east of Ho Chi Minh City, the former Saigon, there is a large air base, just beyond a sweeping bend in the Dong Nai River. During the American war in Vietnam, it was said to be the busiest airport in the world. Since the war ended in 1975, a dense cluster of four residential neighborhoods has grown up around the base. Their total population is perhaps 111,000, while the base itself, now home to advanced long-range fighter-bombers of the Vietnam People’s Air Force, has another 1,200 permanent residents. END_OF_DOCUMENT_TOKEN_TO_BE_REPLACED

On a mild, sunny morning last November, Chuck Searcy and I drove out along a spur of the old Ho Chi Minh Trail to the former Marine base at Khe Sanh, which sits in a bowl of green mountains and coffee plantations in Vietnam’s Quang Tri province, hard on the border with Laos. The seventy-seven-day siege of Khe Sanh in early 1968, coinciding with the Tet Offensive, was the longest battle of what Vietnamese call the American War and a pivotal event in the conflict. By the off-kilter logic of Saigon and Washington, unleashing enough technology and firepower to produce a ten-to-one kill ratio was a metric of success, but the televised carnage of 1968, in which 16,592 Americans died, was too much for audiences back home. After Tet and Khe Sanh, the war was no longer America’s to win, only to avoid losing. END_OF_DOCUMENT_TOKEN_TO_BE_REPLACED

END_OF_DOCUMENT_TOKEN_TO_BE_REPLACED

Monsanto denies that glyphosate, the world’s most widely used herbicide, causes cancer and says decades of scientific studies have shown the chemical to be safe for human use.
END_OF_DOCUMENT_TOKEN_TO_BE_REPLACED Citizentruth.org
(Guest expert article by Charles R. Bailey) As we mark Earth Day this Sunday, we remember the first Earth Day in 1970. That year saw another landmark event: President Nixon brought to an end to the spraying of Agent Orange in Vietnam. That spraying had gone on for a decade. Its aim was to defoliate forests and destroy food crops in order to deny cover and sustenance to opposition forces. The Agent Orange and some of the other herbicides were contaminated with dioxin, a highly toxic substance.

The legacy of Agent Orange/dioxin continues to impact our veterans and the Vietnamese.  Since 1991, scientists at the United States Institute of Medicine have shown dioxin to be a risk factor in a growing number of illnesses and birth defects, and their research is corroborated by the work of Vietnamese scientists. END_OF_DOCUMENT_TOKEN_TO_BE_REPLACED

DANANG, Vietnam (Reuters) – Sailors from a U.S. aircraft carrier on Wednesday visited a Vietnamese shelter for people suffering from the effects of Agent Orange, a chemical used by the U.S. military during the Vietnam War to destroy foliage. END_OF_DOCUMENT_TOKEN_TO_BE_REPLACED 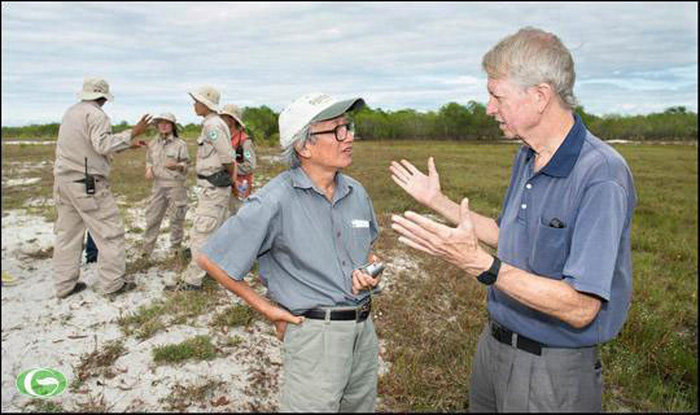 END_OF_DOCUMENT_TOKEN_TO_BE_REPLACED

Vietnam and the U.S. have kickstarted the process of cleaning up the dioxin around Bien Hoa Airport, a heavily contaminated zone just outside Ho Chi Minh City.

The process formally began on Tuesday with the signing of a Memorandum of Intent between the United States Agency for International Development (USAID) and the Military Science Department under Vietnam’s Ministry of Defense.

END_OF_DOCUMENT_TOKEN_TO_BE_REPLACED

HO CHI MINH CITY, Vietnam ― Fifty-five years ago this month, the U.S. Army began spraying millions of gallons of the toxic defoliant known as Agent Orange over large swaths of southern Vietnam. Today, however, instead of resentment and isolation from the U.S., the country is awash with Americanophilia. END_OF_DOCUMENT_TOKEN_TO_BE_REPLACED

VietNamNet Bridge – Under the hot noon sun, more than 20 women at Nguyen Thi Thu Ha’s sewing workshop seem oblivious of the sweat pouring down their faces as they work at their sewing machines.

The seamstresses in Thach That Commune of the capital’s Quoc Oai District are not like most garment sector workers in Viet Nam. At least half are women with disabilities.

Ha, their boss, is too. Her father was a victim of Agent Orange and she suffers some enduring side effects of the toxic herbicide sprayed by American forces in Viet Nam. In addition to her sewing work she heads up the Club of Women with Disabilities in Quoc Oai District. END_OF_DOCUMENT_TOKEN_TO_BE_REPLACED

The report was recently released by the Ministry of Natural Resources and Environment (MoNRE).

Twenty three of these untreated locations are located in urban areas.

THỪA THIÊN- HUẾ — What started out as a gesture of good will has become Richard Hughes’ passion and destiny as he knocks on doors and crosses oceans in search of justice for Vietnamese victims of Agent Orange.

Richard “Dick” Hughes is an American actor who gained worldwide fame for forming a gang of Sài Gòn street boys during the Việt Nam-US war and living with them.

Wartime Việt Nam first impacted on the consciousness of the Pittsburgh-born actor when he was working at the Theatre Company of Boston, a year after his graduation from Boston University Graduate School of Drama in 1967. END_OF_DOCUMENT_TOKEN_TO_BE_REPLACED