A coal-mine that powered German industry for almost half a century will get a new lease on life when it’s turned into a giant battery that stores excess solar and wind energy.

The state of North-Rhine Westphalia is set to turn its Prosper-Haniel hard coal mine into a 200-MW pumped storage hydroelectric reservoir, which acts like a battery and will have enough capacity to power more than 400,000 homes, said state governor Hannelore Kraft. The town of Bottrop, where people worked the 600 meter (1,969 foot) deep mine since 1974, will keep playing a role in providing uninterrupted power for the country, she said.

END_OF_DOCUMENT_TOKEN_TO_BE_REPLACED

Australia is studying plans to transform a disused underground coal mine into a pumped hydro facility, part of a wider effort to reuse retiring fossil fuel sites for renewable energy generation.

END_OF_DOCUMENT_TOKEN_TO_BE_REPLACED

[Somesh Dutta specializes in international dispute resolution. He is currently working with the Max Planck Institute Luxembourg for International, European & Regulatory Procedural Law as a Research Fellow and is a member of the International Max Planck Research School for Successful Dispute Resolution (IMPRS-SDR).]

In particular, developing economies with a large consumer base may have a crucial role in shaping the future of international investment adjudication, and thus an influence on the future flow of capital for global economic growth.

END_OF_DOCUMENT_TOKEN_TO_BE_REPLACED Hanoi (Viet Nam), 29 August 2017 – East and Southeast Asia are at the heart of the global synthetic drug trade, with some drugs manufactured and trafficked in and from the region causing serious public health problems in the region and other parts of the world, said the United Nations Office on Drugs and Crime (UNODC) at a high level in Hanoi, Viet Nam, with the ASEAN group of states, Australia, Canada, China, Japan, the Republic of Korea, the United States, and the European Union.

The region has recently been acknowledged to be the largest methamphetamine market, with seizures surpassing the total for North America. Most countries in the region have reported record meth seizures in recent years, and the number of people admitted for methamphetamine treatment has also been on the rise for several years in a row.

“Methamphetamine use is on the increase across Viet Nam, not only among young drug users in major cities, but also industrialized areas, villages and communities,” said Hoang Anh Tuyen, Deputy Director of the Standing Office on Drugs and Crime (SODC) of the Ministry of Public Security of Viet Nam. “We will not be able to cope unless market demand is addressed and we make progress on trafficking into the country with our neighbours.”

END_OF_DOCUMENT_TOKEN_TO_BE_REPLACED 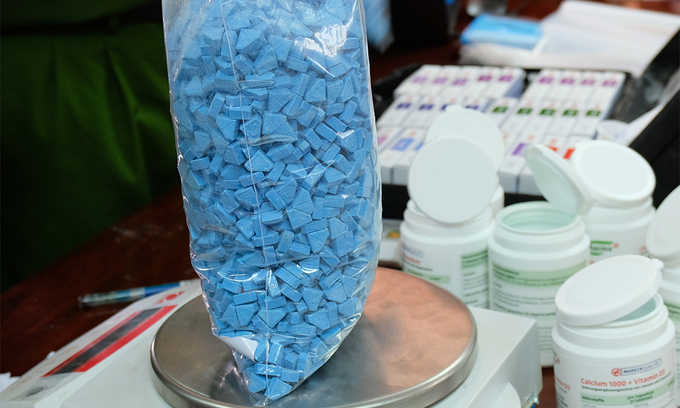 Synthetic drugs hidden in medicine boxes were found in packages sent from abroad to Vietnam in July 2020. Photo by Vietnam Customs.

The number of synthetic drug users in Vietnam has jumped six-fold since 2017, the U.N. Office on Drugs and Crime has said in a report.

END_OF_DOCUMENT_TOKEN_TO_BE_REPLACED

Last month, nine philanthropic organizations pledged $5 billion to protect 30% of the planet over the next decade — the largest commitment of private funding ever made for the conservation of nature. These organizations intend to address three interrelated global crises — the climate crisis, the biodiversity crisis and the public health crisis — while working with Indigenous Peoples and local communities.

The pledges arrive not a moment too soon. A new report released on October 28, 2021 by WRI, the United Nations Educational, Scientific and Cultural Organization (UNESCO), and the International Union for Conservation of Nature (IUCN) reveals that despite substantial carbon stored and absorbed by forests across UNESCO’s World Heritage network, the climate benefits of even some of the world’s most iconic and protected places are under pressure from land use and climate change. Continued reliance on these forests’ carbon sinks and storage depends upon stronger protection measures.

END_OF_DOCUMENT_TOKEN_TO_BE_REPLACED

It took thousands of years for the Mekong Delta to come into existence. It might take humans just a few more decades to undo it.

One summer evening, Le Phi Hai lost his house to the Tien River, one of the two main branches of the Mekong River flowing through the delta in Vietnam. Three summers later, at almost exactly the same hour, the river claimed his house again.

The first time erosion bit into his soil, Hai, now 66, was watching Euro 2016 on his small TV screen. At around 3am, as Cristiano Ronaldo missed a critical penalty shot in Portugal’s match against Austria thousands of miles away, a strange bubbling sound roared from the backyard of Hai’s low brick home in the riverside town of Hong Ngu. As the noise grew to a louder dull rumble, drowning out the screams of the match commentators, he left his TV and walked outside for a quick check. After a few steps, he heard a thunderous “Th-rump!” Suddenly Hai saw his bed, tables, chairs, and finally the TV, with Ronaldo’s face on screen, slump down into a void that had appeared under his feet. The backyard where he was standing became a tiny islet surrounded by turgid water, and down it went.

END_OF_DOCUMENT_TOKEN_TO_BE_REPLACED

The first two days of the UN Climate Conference (COP26) featured over 100 high-level announcements and speeches during the “World Leaders Summit,” helping set the tone for the two-week long conference. The gathering of world leaders was immediately preceded by the G20 Summit held in Rome.

While several important announcements were made that will help to move the needle on global climate action, negotiators will still have their work cut out for them as they try to pave the way for more progress in the coming days.

Here’s a look at the developments so far.

In a final communique, G20 nations recognized the importance of strengthening national climate action this decade, and committed to revisit and further enhance their 2030 emission reduction targets where necessary. This should pave the way for negotiators at COP26 to agree that major emitters will further strengthen their 2030 targets within the next couple of years to keep the Paris Agreement’s 1.5 degrees C (2.7 degrees F) temperature goal within reach.

END_OF_DOCUMENT_TOKEN_TO_BE_REPLACED

European power markets have entered a period of unprecedented change. Power prices have touched new highs: baseload week-ahead prices have risen above €200 per megawatt-hour (MWh)1 in a number of European countries—about four times the average historical level. That increase has been prompted largely by a surge in natural-gas and carbon prices, which currently exceed €100 per MWh2 and €60 per metric ton, respectively. This development has affected the cost of power produced by natural-gas power plants, which broadly set prices in European markets.

At the same time, price volatility is reaching new heights as a result of the uncertain output of renewable assets and a tight supply-and-demand balance in the European power system. Navigating this next normal will be a key challenge for utilities, traders, and large power consumers, and that highlights the importance of developing resilient power-asset portfolios and managing risk.

In this article, we explore five trends that will shape the European power sector in the decade to come and offer some perspectives on how utilities and large consumers might respond.

What’s ahead for the European power sector?

END_OF_DOCUMENT_TOKEN_TO_BE_REPLACED

Through a variety of data sources an evidence-based picture of electricity pricing and the electricity-generation business in Laos is revealed.

A 42-year-old resident of Thongsanang village in central Vientiane, nicknamed To, was upset after receiving an electricity bill in May that was almost twice as high as normal.

“I’m going to send a letter to EDL asking them to investigate this unusual increase in my bill,” he told friends at a local coffee shop.