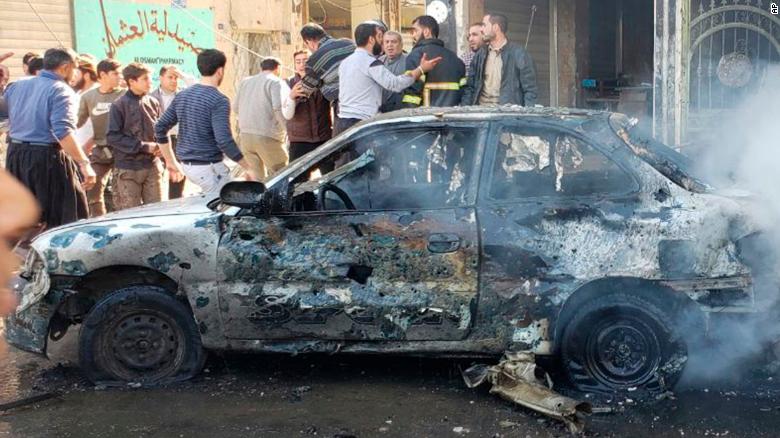 This photo provided by the Syrian anti-government activist group Albab City, which has been authenticated based on its contents and other AP reporting, people check the aftermath of a car bomb exploded in the city of al-Bab, northern Syria, Saturday, Nov. 16, 2019. A car bomb exploded Saturday in a northern Syrian town controlled by Turkey-backed opposition fighters, killing at least 18 people and wounding several others, Syrian opposition activists and Turkey’s Defense Ministry said. (Albab City via AP)

END_OF_DOCUMENT_TOKEN_TO_BE_REPLACED

The first news that militants had taken to the streets of the Islamic City of Marawi on May 23, 2017, came from Facebook. Pictures of masked men carrying assault rifles and waving the black flag of the Islamic State were swirling across social media well before Philippine and international news channels picked up the story. By the time the military and the media had begun to respond, Marawi’s residents were already streaming out of the city by the tens of thousands to seek refuge from the violence. END_OF_DOCUMENT_TOKEN_TO_BE_REPLACED

Two suicide bombers stormed a packed Christian church in southwestern Pakistan on Sunday, killing at least nine people and wounding up to 56, officials said, in the latest attack claimed by Islamic State in the country.

QUETTA, Pakistan/ISLAMABAD: Two suicide bombers stormed a packed Christian church in southwestern Pakistan on Sunday, killing at least nine people and wounding up to 56, officials said, in the latest attack claimed by Islamic State in the country.

Police guards stationed at the church entrance and on its roof killed one of the bombers but the second attacker detonated his explosives-filled vest outside its prayer hall just after Sunday services began in Quetta, capital of Baluchistan province, said Sarfraz Bugti, the provincial home minister. END_OF_DOCUMENT_TOKEN_TO_BE_REPLACED

The Philippines has declared victory over supporters of the Islamic State of Iraq and the Levant (ISIL) group in the southern city of Marawi.

Five months of urban combat left 920 fighters dead and cost the lives of 165 government soldiers and at least 45 civilians.

The government had teamed up with its former enemies from the Moro Islamic Liberation Front in its attempts to snuff out the fighters.

Fighting ended when troops finally overcame pro-ISIL fighters, including foreigners, who were holed up in several buildings in the heart of the city.

Officials say martial law will continue to be implemented in the wider Mindanao area.

The end of the clashes gave way to scenes of a historic city in ruins with soldiers patrolling the gutted out and pockmarked remains of apartment blocks and houses.

Pictures taken after the battle reveal it devastating impact; buildings turned to rubble, cars dotted with bullet holes, and personal belongings and furniture heaped beside the shell of a row of houses.

More than 600,000 locals were displaced by the fighting.

END_OF_DOCUMENT_TOKEN_TO_BE_REPLACED

At least 13 people have died and 100 have been injured after a van ploughed into a crowd of people in Las Ramblas area of Barcelona, in an attack that mirrors the spate of recent atrocities by terrorists who used vehicles to ram down civilians across Europe.

Catalan authorities confirmed that 13 people have been killed and 15 people are seriously injured following the attack in the area popular with tourists.

SYDNEY — A senior Islamic State commander directed a group of Australian men to build a bomb destined for an Etihad Airways flight out of Sydney, with a second poisonous gas plot also in the works, police alleged Friday.

END_OF_DOCUMENT_TOKEN_TO_BE_REPLACED

Australian police are treating a deadly siege in the southern city of Melbourne as an “act of terrorism” after a claim by the Islamic State of Iraq and the Levant (ISIL, known as ISIS) group that one of its fighters was the gunman responsible.

Police shot dead Yacqub Khayre on Monday after he held a woman hostage inside an apartment building in Melbourne, Australia‘s second-largest city. END_OF_DOCUMENT_TOKEN_TO_BE_REPLACED

The Philippine government on Sunday formally called off the latest round of peace talks with communist insurgents, after the parties failed to resolve a dispute over a rebel order for fighters to step up attacks.

“We are maintaining the decision made not to participate in the fifth round of talks,” chief government negotiator Jesus Dureza told journalists after almost 10 hours of closed-door consultations. END_OF_DOCUMENT_TOKEN_TO_BE_REPLACED

Philippine President Rodrigo Duterte has declared martial law on the southern island of Mindanao after about 100 Muslim fighters laid siege to a major city following a deadly gun battle with government forces. END_OF_DOCUMENT_TOKEN_TO_BE_REPLACED

A political solution to the war in Syria is not possible with President Bashar al-Assad in power, the US ambassador to the UN has said in an apparent hardening of the Trump administration’s position.

Defeating the Islamic State of Iraq and the Levant (ISIL) group, pushing Iranian influence out of Syria, and the removal of Assad are priorities for the US administration, Nikki Haley said in an interview to CNN, which will air in full on Sunday. END_OF_DOCUMENT_TOKEN_TO_BE_REPLACED

ISIL fighters from China’s Uighur ethnic minority have vowed to return home and “shed blood like rivers” in what security experts said marked the first such threat against Chinese targets.

The threat came in a half-hour video released Monday by a division of Islamic State of Iraq and the Levant (ISIL) featuring fighters from China’s Uighur minority, said the US-based SITE Intelligence Group, which analysed the footage.

China has for years blamed exiled Uighur “separatists” for a series of violent attacks in its western Xinjiang region – the Muslim Uighur homeland – and warned of the potential for them to link up with violent groups.

In the video, a Uighur fighter issued the threat against China just before executing an alleged informant.

“Oh, you Chinese who do not understand what people say. We are the soldiers of the Caliphate, and we will come to you to clarify to you with the tongues of our weapons, to shed blood like rivers and avenging the oppressed,” according to SITE’s translation.