Phillippine police have killed a city mayor, his wife and 10 others during a series of pre-dawn anti-drug raids in the south, officials said.

Reynaldo Parojinog, mayor of Ozamiz city, is the latest official to be killed since President Rodrigo Duterte launched a drug war. END_OF_DOCUMENT_TOKEN_TO_BE_REPLACED

HONG KONG/THE HAGUE – A Philippine lawyer said he filed a complaint against President Rodrigo Duterte and senior officials at the International Criminal Court (ICC) on Monday, accusing them of crimes against humanity in a nationwide anti-drugs crackdown.

Attorney Jude Sabio said in the 77-page complaint that Duterte “repeatedly, unchangingly and continuously” committed crimes against humanity and that under him, killing drug suspects and other criminals has become “best practice.”

Sabio is the lawyer for Edgar Matobato, a man who has testified in the Philippines Senate that he was part of a hit squad that operated on Duterte’s orders. END_OF_DOCUMENT_TOKEN_TO_BE_REPLACED

FILE PHOTO: A woman prays for her loved one who she says was killed due to alleged involvement in illegal drugs, during a Holy Eucharist mass against extra-judicial killings inside a Roman Catholic Church in Paranaque city, metro Manila, Philippines March 2, 2017. REUTERS/Romeo Ranoco/File Photo

MANILA: A Philippine senator called for a probe on Wednesday into allegations by senior officers in a Reuters report that police received cash rewards for executing drug suspects, while a police spokesman challenged the claims but said they would be investigated.

Senator Sherwin Gatchalian said in a statement that the Philippine National Police (PNP) should take “drastic measures” to verify the allegations made by two senior police officers, and punish those who have “broken their vow to protect the Filipino people.” END_OF_DOCUMENT_TOKEN_TO_BE_REPLACED

MANILA: The Philippine police have received cash payments for executing drug suspects, planted evidence at crime scenes and carried out most of the killings they have long blamed on vigilantes, said two senior officers who are critical of President Rodrigo Duterte’s “war on drugs.”

In the most detailed insider accounts yet of the drug war’s secret mechanics, the two senior officials challenged the government’s explanations of the killings in interviews with Reuters. END_OF_DOCUMENT_TOKEN_TO_BE_REPLACED

After months of living in hiding, Arturo Lascanas – a former police officer who accused Philippine president Rodrigo Duterte of orchestrating a decades-long campaign of death squads and lawless murder – has fled to Singapore.

The retired 56-year-old officer is a self-confessed member of the Davao Death Squad (DDS), a group he alleges was formed in the late 1980s by then mayor Rodrigo Duterte, to kill hardened criminals, drug dealers and political opponents. 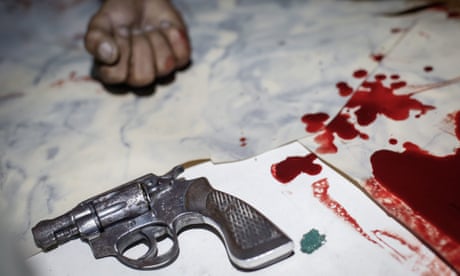 Lascanas has been hiding since his dramatic revelations, but managed to leave the country on Saturday night on a Tiger Airways flight to Singapore.

“I have received threats that a lawsuit would be filed against me, and there are also people looking for me as well,” Lascanas told local reporters before he departed.

For months Lascanas has been holed up in a safe house in Manila, living under protective guard, unable to go outside. Now with the looming lawsuit, he said it was time to leave the Philippines for the “time being”.

When he presented at immigration on Saturday evening, one of the most wanted men in the country was told to take a seat, but fifteen minutes later his passport was stamped. Immigration authorities said there was no travel ban, or hold departure, so Lascanas was permitted to leave.

“Mr Lascanas did not have any immigration lookout bulletin order or hold departure order issued against him that could have delayed or prevented his departure,” said immigration spokesperson Antonette Mangrobang, “Hence he was cleared to depart.”

After denying the claims of the DDS in a Senate hearing last October, Lascanas made a stunning turnaround this February, telling the Senate in a second hearing that he had been forced to lie, and worried for the safety of his family if he had divulged the truth.

When the Guardian met Lascanas in his safe house this March, the former officer claimed that decades of extrajudicial killings in Davao weighed on his conscience and he had decided that he didn’t want to take his sins to the grave.

Rodrigo Duterte was mayor of Davao, a city on the southern island of Mindanao, for more than two decades before winning the presidency last May on a promise to rid the country of drugs and crime.

The drug war that has ensued has sparked deep alarm among the international community, with more than 7,000 people killed in police operations and by so-called vigilantes since last July.

After undergoing kidney surgery and a spiritual awakening, Lascanas said he felt compelled to tell the truth about the death squads of Davao, a methodology he claims has been scaled up nationwide under the president’s current war on drugs.

The Duterte administration has vehemently denied the claims, describing the DDS as a “creation of the media,” and Lascanas’ claims as part of a plot to unseat the government.

This is reportedly the first time Lascanas has left the Philippines. He showed immigration he had a return ticket, leaving Singapore on 22 April, but it is unclear if and when he will return.

“I am sure, I might either be jailed or killed. It’s just one of the two possibilities,” he told the Inquirer from the city state, “But for me, I know God has a plan and that would be my destiny for telling the truth. I have accepted that.”

Philippine President Rodrigo Duterte has said he would not be intimidated by the prospect of the International Criminal Court (ICC) putting him on trial over his bloody war on drugs, promising that his campaign would continue and would be “brutal”. END_OF_DOCUMENT_TOKEN_TO_BE_REPLACED

An opposition lawmaker filed an impeachment complaint in the Philippine Congress on Thursday against President Rodrigo Duterte, calling for his removal for what he said were high crimes, betrayal of public trust and abuses of power. END_OF_DOCUMENT_TOKEN_TO_BE_REPLACED

The Philippine vice president has raised an alarm about the country’s bloody crackdown on illegal drug use, saying it can’t be solved “with bullets alone”, adding Filipinos should “defy brazen incursions on their rights”.

Vice President Leni Robredo’s comments, some of her sharpest critiques so far of Rodrigo Duterte’s anti-drug campaign, are likely to antagonise the brash-talking president. END_OF_DOCUMENT_TOKEN_TO_BE_REPLACED

Lascanas said that he had personally killed 300 people, about 200 as a member of a “Davao death squad”, with his last in 2015. He also detailed two cases where he had murdered critics of Duterte, under the instruction of the then-mayor’s bodyguard. END_OF_DOCUMENT_TOKEN_TO_BE_REPLACED But now, more than seven months into Duterte’s tenure, with the death toll climbing night by night, the country’s Catholic hierarchy is finding its voice. In a pastoral letter published in February, church leaders denounced Duterte’s campaign as a “reign of terror” against the poor. END_OF_DOCUMENT_TOKEN_TO_BE_REPLACED

A supporter of Senator Leila De Lima (not pictured), a top critic of President Rodrigo Duterte, shouts slogans as they hold a rally outside the court building in Muntinlupa City. (Photo: AFP)

MANILA: More than 1,000 people took to the streets of Manila on Saturday to protest Philippine President Rodrigo Duterte’s brutal war on drugs, following the arrest of his most high-profile critic.

The protestors massed outside the national police headquarters where Senator Leila de Lima was detained on Friday, in a demonstration against the alleged death-squad murders of thousands of drug suspects.

Demonstrators warned the Duterte crackdown could lead to a repeat of the military-backed dictatorship of Ferdinand Marcos, which was toppled in a bloodless “People Power” revolution 31 years ago to the day. END_OF_DOCUMENT_TOKEN_TO_BE_REPLACED

A Philippines senator and staunch critic of President Rodrigo Duterte’s war on drugs has been arrested by law enforcement agents after charges were filed in court alleging that she received money from drug dealers inside the country’s prisons.

Senator Leila de Lima is accused of orchestrating a drug-trafficking ring when she was justice secretary during the 2010-2015 administration of Benigno Aquino.

“The truth will come out and I will achieve justice. I am innocent,” she told reporters shortly before law enforcers escorted her away from her office on Friday. END_OF_DOCUMENT_TOKEN_TO_BE_REPLACED

The former policeman, Arthur Lascanas, told a news conference on Monday that he was speaking up because he was bothered by his conscience – including his role in the deaths of his two brothers, whom he ordered killed because they were drug users.

“I had my own two brothers killed. Even if I end up dead, I’m content because I’ve fulfilled my promise to the Lord to make a public confession,” he said, breaking into tears. END_OF_DOCUMENT_TOKEN_TO_BE_REPLACED

Thousands of Catholics have gathered in the Philippine capital in a “show of force” to protest extrajudicial killings being carried out under the banner of President Rodrigo Duterte’s war on drugs.

The rally, dubbed the “Walk for Life”, was attended by 20,000 people, organisers said. Manila police estimated the crowd at 10,000.

At the biggest rally yet against the killings, members of one of the nation’s oldest and most powerful institutions prayed and sang hymns as they marched before dawn on Saturday, to condemn a “spreading culture of violence”.

More than 7,000 people have died since Duterte took office almost eight months ago and ordered an unprecedented crime war that has drawn global criticism for alleged human rights abuses.

The move, however, has been popular with many in the mainly Catholic nation.

“We have to stand up. Somehow this is already a show of force by the faithful that they don’t like these extrajudicial killings,” Manila bishop Broderick Pabillo told AFP news agency before addressing the crowd.

“I am alarmed and angry at what’s happening because this is something that is regressive. It does not show our humanity.”

The demonstrators also condemned legislation restoring the death penalty for drug-related crimes and other offences. END_OF_DOCUMENT_TOKEN_TO_BE_REPLACED

The Philippines’ Catholic Church has blasted President Rodrigo Duterte’s “war on drugs” for creating a “reign of terror”.

In its most strongly worded attack yet on the crackdown on drug pushers and users, the powerful Catholic Bishops’ Conference of the Philippines said killing people was not the answer to trafficking of illegal drugs.

The Church said, in a pastoral letter that will be read out in sermons on Sunday, it was disturbing that many did not care about the bloodshed, or even approved of it.

“An even greater cause of concern is the indifference of many to this kind of wrong. It is considered as normal, and, even worse, something that [according to them] needs to be done,” the bishops said in the letter, a copy of which was obtained by the Reuters news agency. END_OF_DOCUMENT_TOKEN_TO_BE_REPLACED