By Blake Hounshell and Leah Askarinam 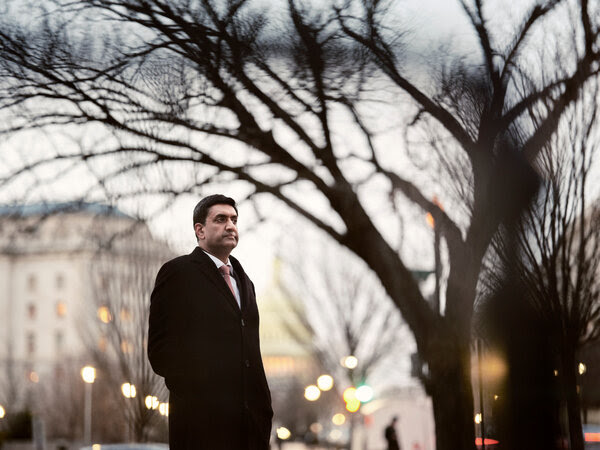 Representative Ro Khanna writes in a new book that too much wealth is concentrated in too few hands, and too many digital jobs are crowded into a handful of tech hubs.

Not your average political book

It’s not often that you meet a member of Congress who is eager to discuss the German philosopher Jürgen Habermas.

But Representative Ro Khanna is not like most members of Congress. He represents one of the wealthiest districts in America — a chunk of Silicon Valley that is home to tech behemoths like Apple and Intel — yet he was a co-chair of Bernie Sanders’ 2020 presidential campaign. He’s a former intellectual property lawyer whose 2016 House bid was backed by venture capitalists and tech moguls, but he’s also a prominent critic of social media companies like Facebook.

So it’s fitting that Khanna’s new book, “Dignity in a Digital Age,” embodies all of those complexities. With manifesto-like ambition, the California Democrat proposes sweeping fixes for what, in his view, ails America: too much wealth concentrated in too few hands, and too many digital jobs crowded into a handful of tech hubs. He wants to decentralize those opportunities so that places like Paintsville, Ky., or Jefferson, Iowa, can also thrive.

“People feel a lack of control over their own lives,” Khanna said in an interview. “They see all these billionaires being created in my district, billions of dollars of wealth being created.”

There’s an unspoken political motivation here — a hope that, by spreading the digital wealth, Khanna’s ideas can reduce the toxic polarization epitomized by Donald Trump. The former president seized political advantage from the anxieties about the postindustrial economy in many of the very places that Khanna wants to help. But the book is no partisan screed, and it is dense enough that when we told him we were in the middle of it, he joked, “I guess you’re paid to read and write.”

Khanna’s other audience is his Silicon Valley friends. And here’s where Habermas comes in. Khanna studied the German philosopher, famous for his 1962 treatise on “the public sphere,” for insights into how to create what Khanna calls “ideal speech conditions.” What he found was that social media companies, while delivering on their promises to connect like-minded people all over the world, created platforms that were also rife with “misinformation, disinformation and hate.”

“I think Silicon Valley overall is an extraordinary place of innovation, of entrepreneurship, of high achievement,” Khanna said. “But I don’t think it has lived up yet to its responsibilities in a democratic society.”

Khanna’s book comes at a time of extraordinary pressure on the Valley’s tech giants, and none more so than Facebook.

In October, a trove of documents leaked to The Wall Street Journal by a whistle-blower revealed internal debates at Facebook about how to market its products to teens and children, prompting widespread public revulsion. The whistle-blower, Frances Haugen, also alleged that Facebook had contributed to the Jan. 6 riot at the Capitol by loosening “civic integrity” controls after the 2020 election, resulting in a flood of posts calling for political violence.

To Khanna, Facebook’s troubles illuminate how Mark Zuckerberg, the company’s founder and chief executive, has “a philosophical blind spot” about social media being anything less than an unambiguous good.

“This idea that you can just create spaces where people talk, and then that’s somehow going to lead to dialogue and understanding and truth, seems hopelessly naïve,” Khanna said.

The genesis of Khanna’s book was an unusual trip that he took just three months into his first term.

Representative Hal Rogers, a Republican from southeastern Kentucky, invited the freshman lawmaker to visit his impoverished Appalachian district — the mirror opposite of Khanna’s land of Teslas and $3,000-per-month studio apartments. The retreat of the coal industry has devastated Rogers’s district, which had a median household income of $35,636 as of 2019.There, Khanna met Alex Hughes, a former construction worker and printer installer who had stumbled upon an innovative training program run by a Louisville firm called Interapt and who found a new career as a software developer. Half jokingly, Rogers had taken to calling the embryonic tech sector in his district “Silicon Holler.”

The visit fired Khanna’s imagination. “Suddenly, I realized that this aspiration for digital wealth and technology was not an imposition of bias from a coastal mind-set,” he recalled. “That this was actually something that communities themselves deeply wanted.”

Remote work has become the norm for millions of Americans during the pandemic, and once-skeptical companies have figured out how to find and nurture talent wherever it resides.

And that, Khanna says, offers an extraordinary opportunity to revive communities all over the country — part of the solution for the “American carnage” that Donald Trump spoke about in his inaugural address. He predicts there will be more than 25 million digital jobs in the United States by 2025 — more than manufacturing and construction combined.

Maybe, Khanna thinks, seeding those jobs outside of the usual tech centers like the Bay Area, Seattle and Austin could help reduce the polarization that plagues American politics. What if the government required, say, software companies that wanted federal contracts to employ at least 10 percent of their workers in rural areas?

“Could you actually have projects and teamwork and interaction in this digital sphere that at least reduces some of the tension and anxiety?” he said.

Silicon Valley is littered with well-meaning projects that amount to “techno-babble or this techno-optimism that somehow everyone is going to code,” Khanna acknowledged. He’s painfully aware of how his proposals could be lumped together with much-ridiculed ideas like teaching homeless people to become software engineers.

So Khanna rattles off an array of initiatives that would harness the resources of the federal government to the agility of the private sector — building “digital grant colleges” inside the country’s 112 land-grant universities to teach applied technology skills, underwriting apprenticeship programs at tech companies, creating a “national digital corps” as a kind of Peace Corps for rural America.

“It’s got to be more fundamental,” he said.